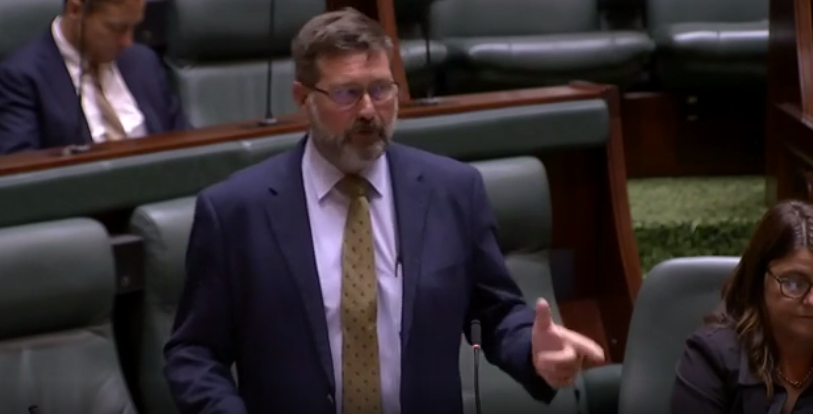 I seek an urgent investigation into the causes of mental health injuries to officers in eastern region division 4 that includes an explanation of what actions are being taken to identify and remove the dangers to these officers.

Mr TILLEY (Benambra) (19:23): (6284) I wish to raise a matter for the attention of the Minister for Police. The action I seek is an urgent investigation into the causes of mental health injuries to officers in eastern region division 4 that includes an explanation of what actions are being taken to identify and remove the dangers to these officers.

The lack of police in my electorate is putting the members on the beat and the public at risk. Last sitting week I raised the issue of the young single mum, with her house under siege from a drunk who had smashed a window at her home. You may recall that a neighbour intervened and was hit over the head with a beer bottle for his troubles. Police never attended, despite 000 calls.

On Valentine’s Day a Wodonga woman called police on behalf of her mum who had a car driven at her in the street. She called 000 and again no-one attended. The daughter rang the police station the next day, and the police member was apologetic. By the time they had gotten to the job it was 4½ hours later, and it was a drive-by. She was told that the lesser jobs were prioritised because of the lack of staff. I do not think an assault with a weapon is a low priority, but anyway.

There is more of this going on. A 72-year-old man with mental health issues is suffering through a lack of action over repeated illegal weekend fireworks in West Wodonga. He phoned 000 without response. He sent an email to the station commander that included his fireworks log. His interpretation of the response was ‘Poor us; we don’t have the resources. You’re the only one who cares, and we have more serious things to do’.

A wellbeing officer at a Wodonga school was threatened by a student. Police did not charge him despite having admissions of the offence. An intervention order was invoked. Even though that order was breached multiple times, police refused to extradite the offender from just across the border in New South Wales, in Albury. The victim believes the child’s disability made it too hard for the police, and she was in constant fear for her life. It took nine months for police to act on that breach.

I could go on with all these case histories, but at the start of the month I understand there were 28 police members in eastern region division 4 sick or broken as a result of workload and/or management practices. It is not only responding to incidents, it is the follow-ups, investigations and paperwork that are falling by the wayside. Mental health injuries and the causes of those injuries cannot be ignored. Minister, you have a responsibility morally and under the Occupational Health and Safety Act 2004 as well. I fear for my former colleagues, those members that are all left behind to carry this weight. The extra workload puts their own health and wellbeing at risk.

This is not a numbers game. These officers are not disposable, so do not blow me off with, ‘This government has given more police resources’, because they are not coming to country and regional Victoria. It is not backing up those hardworking people in country and regional Victoria. So for the sake of Victorians and our members of the police force, please, you need to act now.