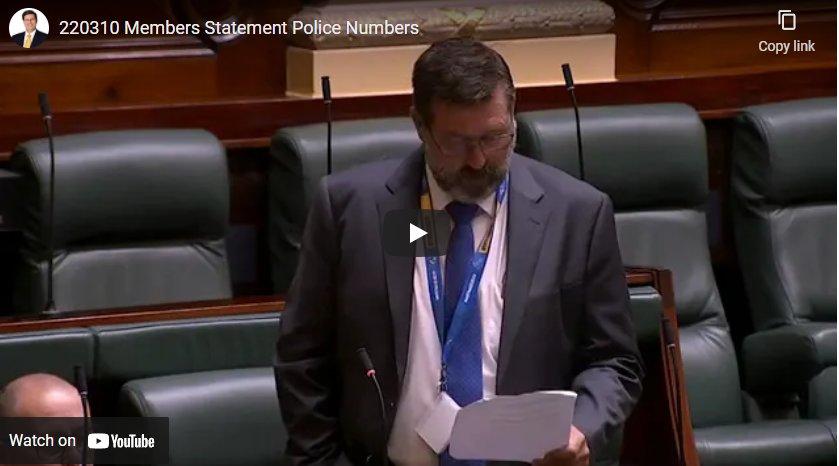 Mr TILLEY (Benambra) (09:42): Thanks to the member for Gembrook for his work yesterday, particular in the chamber. We heard countless horror stories involving delays of ambulance responses that have cost lives. In the Benambra district ambulance wait times in the Indigo, Towong and Alpine shires continue to fail to meet the standard benchmark. They are close to the worst in the state of Victoria. But ambulance waits are not the issue, particularly in Wodonga; it is police.

Sarah Chamberlain recently had an unwanted, drunk and aggressive visitor at her home, a home with a six-month-old baby. When the visitor was refused entry and while she was on the phone to 000, a window was smashed by this offender. The ruckus brought a nearby neighbour onto the street, and for their trouble they copped a beer bottle over the head. The ambulance was called, but it had to sit at the top of the street, protocol dictating they wait for the police to arrive. An hour later they left, the victim driving themselves to hospital. Another hour later Sarah called police again and was told she should take herself to the station. They apologised; they had only one unit on deck. I do not blame the police, I do not blame the ambos; this is on the Labor government and its myopic focus on metropolitan Melbourne that leaves the rest of Victoria under-resourced. I will have significantly more to say in the coming weeks and into the future.