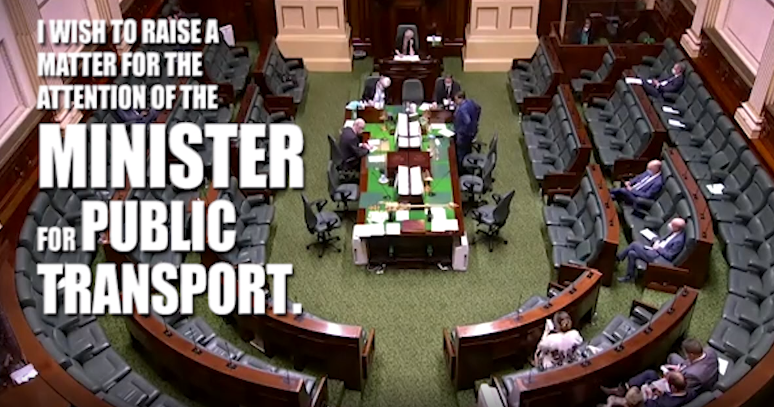 Mr TILLEY (Benambra) (19:20): (6204) I wish to raise a matter for the attention of the Minister for Public Transport. The action I seek is for him to immediately fund additional bus services that will meet the existing and growing needs of Wodonga’s growth corridors, including Killara, Baranduda and Leneva.

Yesterday in this place we heard from the Minister for Education talking about Wobbly the Wizard and saying how Labor had delivered on getting kids back to school. Well, that is precisely the problem we have got in the north-east. Kids cannot get to school. It is all wobbly. There are children literally stranded at a bus shelter where no bus can pick them up or the costs are so prohibitive that the parents cannot afford it. Their crime is simply they do not live 4.8 kilometres from a school or they are not going to their nearest school. Killara is exactly 4.3 kilometres from Bandiana Primary, and the cut-off for the school bus passes is 4.8 kilometres. So being just 500 metres inside the rule their alternative is just simply to walk to school, crossing the Murray Valley Highway and the Kiewa Valley Highway. Others who started their education at other primary schools in the area and who have relationships with friends and teachers but have moved to Killara, which is the new growth area, are frozen out.

Killara is a rapidly growing estate in Wodonga. There are 540 new homes in the estate and 600 new homes in the nearby Baranduda estate. There are, through the government’s own formula, approximately 11 000 vehicle movements every day. The advice provided by the Department of Education and Training to families in these areas caught up in this mess is to catch public transport, but the problem with that is they simply cannot—there is none. It goes on. There are multiple reports highlighting the need for an additional bus route in Wodonga’s growth corridors, but a Department of Transport report dating back to 2011 acknowledged the limitations of existing bus routes and warned that the situation would only deteriorate as the city grew. Wodonga has grown 20 per cent since 2011, and the Wodonga council’s Wodonga Integrated Transport Strategy 2015 also highlights the need for the Victorian Labor government to add services to the growth areas. I understand a potential bus route for this side of Wodonga was under Treasury’s consideration just a few short years back but was never heard of again.

Without a public transport bus the only option for a Killara mum with three primary school students is to apply to get her children on a country school bus that is going through, but that is cost prohibitive—a spare seat costs them $120 per term. If someone comes along who is eligible, those kids get thrown off even though they have already paid the $120. Look, one of the problems is—social media is not an exact science, but it turned from 50 parents overnight, within 5 hours, to get more kids on buses—