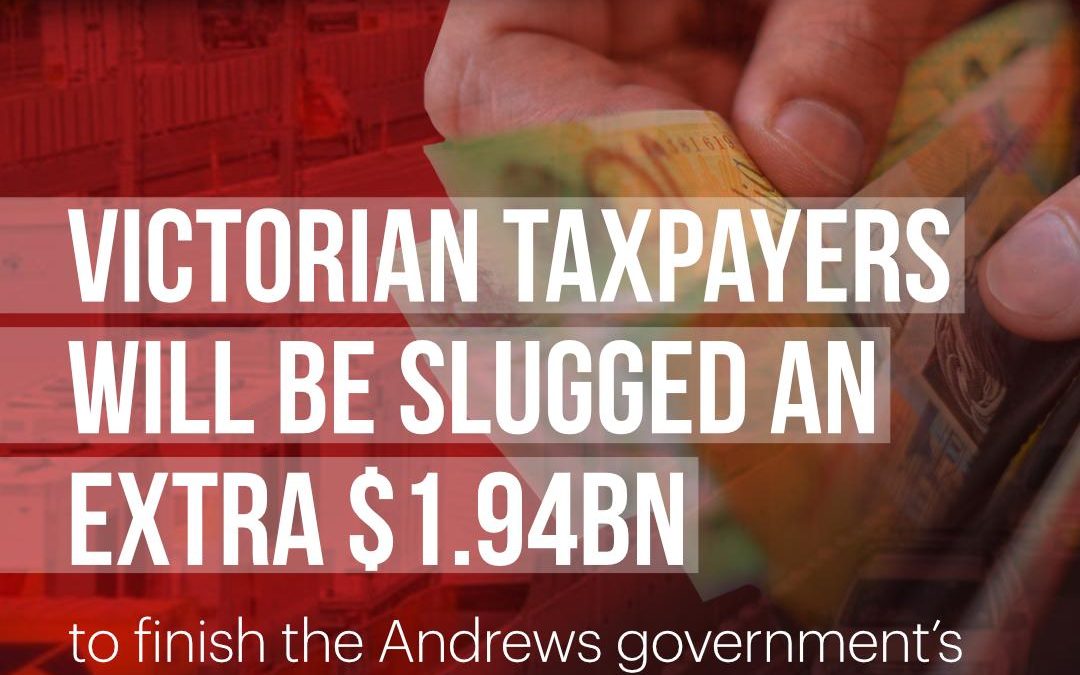 Confirmation that Victorian families and businesses will pick up the tab of Daniel Andrews’ latest big build blunder is a further blow to Victoria’s recovery.

After almost two years of suspended works, Daniel Andrews has announced a massive $3.9 billion blowout to the West Gate Tunnel project – which will now cost twice the original estimate and be delivered at least three years late.

Victorian families, workers and businesses will pay a massive $1.94 billion toward the blowout– almost twice the amount Daniel Andrews wasted not to build the East West Link in 2015.

Today’s blowout is real money that could deliver life-changing outcomes for Victorians, including over 233,000 elective surgeries, 13,000 new mental health professionals or 29,000 new teachers.

Instead of supporting local communities to recover and rebuild, Labor’s mismanagement has seen even more opportunities to invest in the services that matter lost.

“Daniel Andrews continues to treat people’s money as his own instead of fixing the problems that matter.”

“Every dollar that is wasted on Daniel Andrews’ big build blowouts is one dollar less to rebuild our mental health, jobs, schools and the state’s health system.”

“Labor’s constant waste is putting our community further behind. Victoria needs a new path forward to get our state back on track.”

Leader of the Opposition, Matthew Guy

“Instead of investing in our recovery, Daniel Andrews continues to burn Victorians’ money on his botched projects.”

“If the money from today’s blowout was instead invested into our health system, Victoria’s entire elective surgery waitlist could be eliminated four times over.”

“Every time Daniel Andrews wastes a dollar Victorian families are the losers as the services that matter continue to fall behind.”