More workers to support hospitality and accommodation to reopen, recover and rebuild 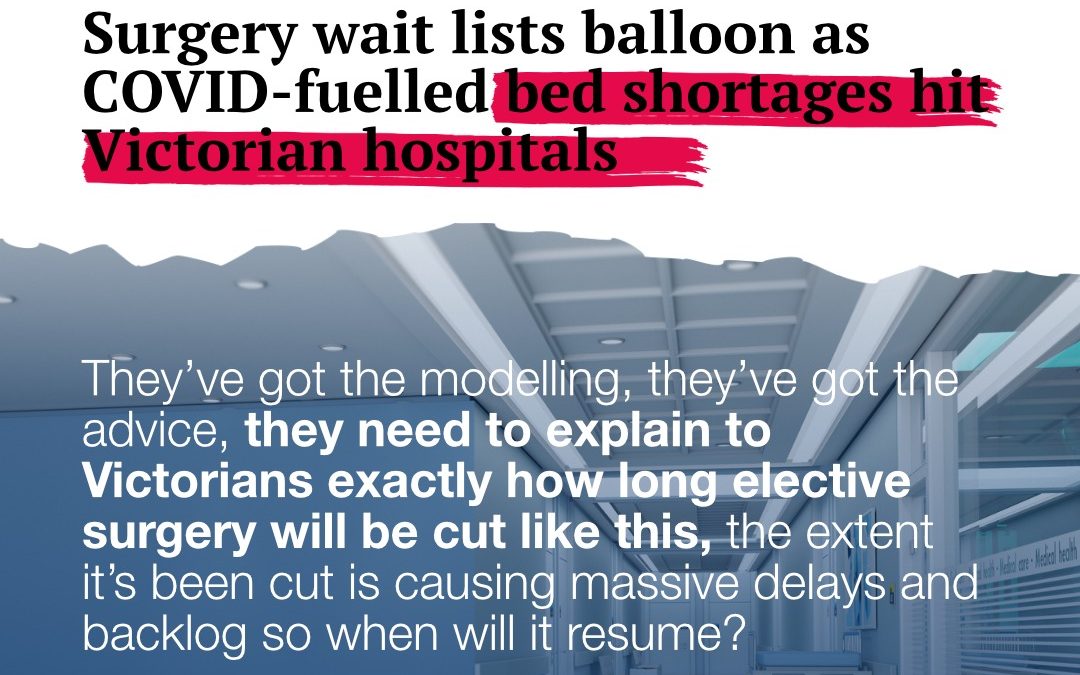 In the last quarter alone, nearly a thousand patients joined the tens of thousands of Victorians currently waiting in pain for vital elective surgery.

Concerningly, 1 in 5 patients on the elective surgery waitlist are not being treated within the clinically recommended time.

The issue is mad more critical by the lack of clear information on the extent of waiting lists on the Border. The incompatibility of reporting systems between NSW and Victoria means that there is no clear reference point to identify the extent of our waiting lists.

What we do know is that the waiting time for Category 2 and Category 3 elective surgery, is now well in excess of the accepted benchmark of within 90 days and a year respectively. Surgeries are being shifted to the Albury Private but how long that is sustainable is anyone’s guess.

The failure to prepare the promised 4,000 ICU beds was also confirmed at yesterday’s hearing with the government stating they had only prepared an additional 978 new ICU beds since April last year, but the true numbers of operational ICU beds remain well under this level.

This failure to prepare these beds has led to the suspension, and in many cases, the indefinite cancellation of elective surgery procedures right across the state.

Labor’s blanket ban of vital elective surgery must be lifted so that hospital wards of empty beds, surgeons, and staff sitting at home can become operational again and allow for Victorians to get the vital care they need.

After months of the most severe COVID restrictions and with the worst outcomes in Australia, Victorians now face the risk of not being able to get the care they need when they need. Deferring this care has, and will, put more lives at risk.

“A record number of Victorians’ health is deteriorating as they wait for vital elective surgery, showing the true extent of Victoria’s health crisis under the Andrews Labor Government.

“With nowhere near the 4,000 promised ICU beds, we are now seeing tens of thousands on the elective surgery waitlist, ambulances ramping and emergency departments overwhelmed as Victorian’s health crisis continues to deepen each day.”