Supporting the mental health of our kids 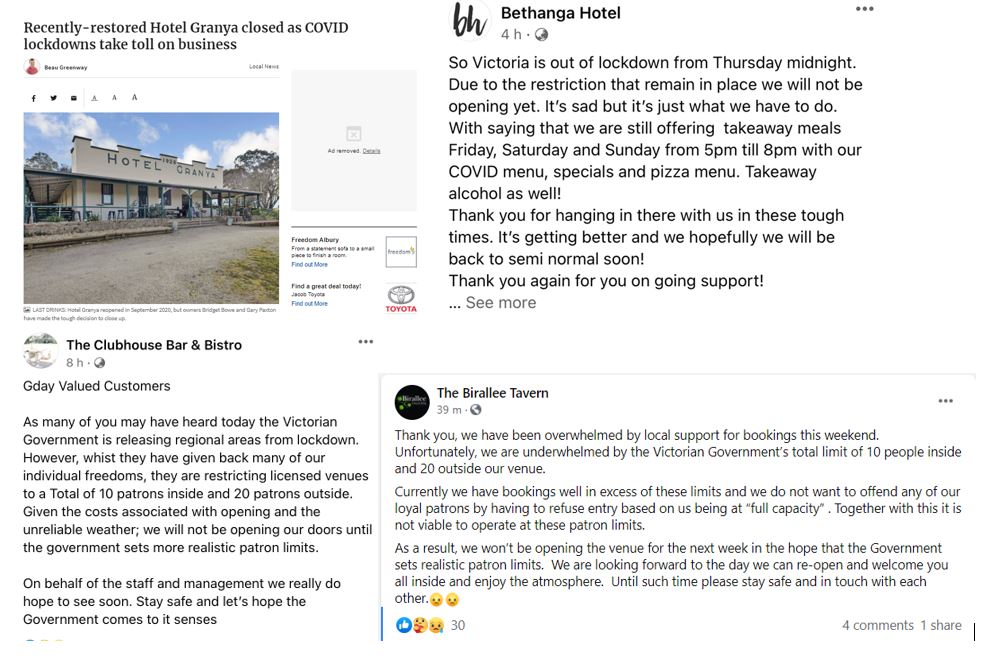 Thousands of regional hospitality businesses will stay shut on Friday and their staff will still be out of work as a result of the unworkable rules imposed by Daniel Andrews.

The Andrews Labor Government cruelly offered a small hope for country businesses with yesterday’s announcement it will ‘ease’ regional restrictions, only to slap them with capacity limits so low that it’s not viable to reopen.

Shadow Minister for Gaming and Liquor Regulation Steph Ryan said many pubs and clubs had told her in the past 24 hours the meaningless ‘easing’ gave them no choice but to stay closed for the foreseeable future.

Regional hospitality businesses can only open with 10 patrons inside and 20 seated outside – a fraction of the capacity of many venues.

“This is not a plan to reopen. It’s a cruel blow to regional hospitality businesses who hoped they would be seeing some light at the end of the tunnel,” Ms Ryan said.

“Allowing a maximum of up to 30 patrons is a fraction of the capacity of many venues that would normally seat hundreds of diners at any given time.

“Pubs and clubs have detailed COVID Safe plans and practices in place to keep patrons and staff safe.

“The chopping and changing again of restrictions is devastating to hospitality businesses that are already struggling to stay afloat.”

Many hospitality venues have already made the hard decision to cut back opening hours and staffing numbers.

This week’s restriction changes have been described as “mind-boggling” and “meaningless” by some venue operators.

“A 30-person capacity is a kick in the guts to venues that have been operating at a fraction of their capacity for 18 months now,” Ms Ryan said.

“The Andrews Labor Government’s unworkable rules have delivered no hope and no plan for regional pubs and Clubs.

“This is just another cruel blow to regional pubs and clubs by a Premier who doesn’t care about the damage his Labor Government’s iron-fisted approach is inflicting on regional Victoria.”