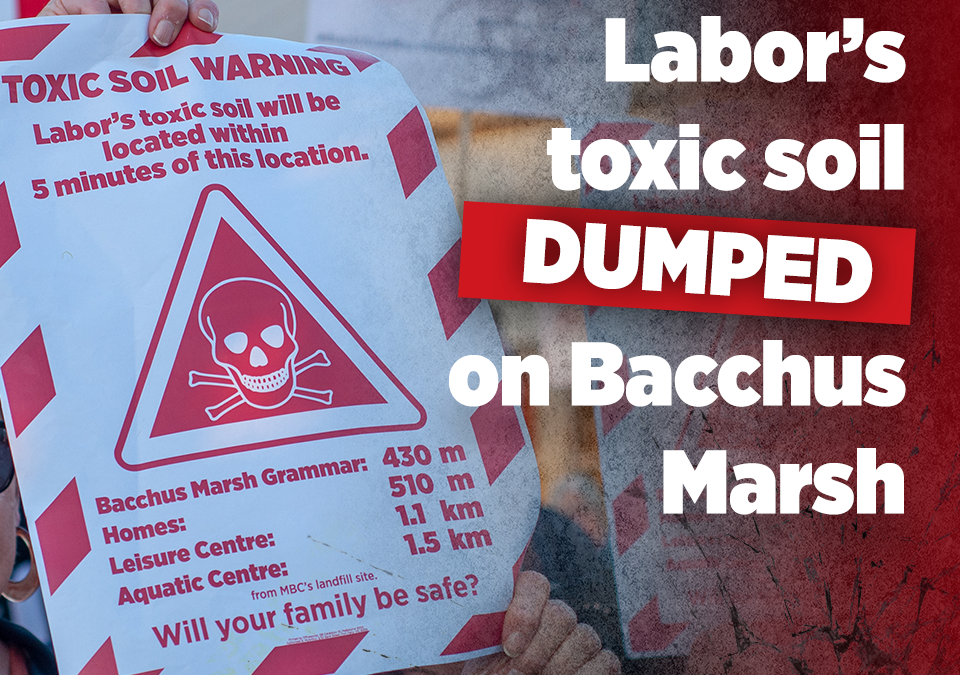 In a massive kick in the guts to the Bacchus Marsh community, the Andrews Labor Government’s environmental regulator has approved plans to dump millions of tonnes of PFAS toxic soil on the doorsteps of local residents.

The government has for months been trying to rush through approvals to dump millions of tonnes of PFAS soil from its trouble-plagued West Gate Tunnel Project, which is billions of dollars over budget and years behind schedule.

In a major embarrassment late last year, the EPA was forced to revoke previous approvals to dump toxic soil at Bacchus Marsh after it was discovered through Supreme Court proceedings commenced by the local community, that the EPA had acted unlawfully in ticking off previous plans to dump toxic soil.

The Andrews Labor Government has also rushed through regulations exempting the foreign-owned tunnel construction companies from paying any landfill levies on the millions of tonnes of toxic PFAS soil they’ll be dumping.  This has left taxpayers to foot the bill to clean up the toxic mess, which is expected to cost tens of millions of dollars.

To add insult to injury, the government’s also allowing these foreign-owned tunnel contractors to be eligible for taxpayer funded grants of up to $10 million to fund “research” into the PFAS toxic soil mess.

“The Andrews Labor Government and the EPA are making Bacchus Marsh a toxic soil dumping ground and have treated local families with absolute contempt.

“It’s a massive kick in the guts to the Bacchus Marsh community. The Andrews Labor Government’s environmental regulator was caught out last year approving this toxic dump unlawfully, but it’s now approved it again.

“The EPA should be protecting people and our environment, not rushing through approvals to dump millions of tonnes of contaminated soil from the Labor’s trouble-plagued West Gate Tunnel project on the doorsteps of a school, homes and vegetable farms.

“Jacinta Allan and the Andrews Labor Government created this toxic mess, and at every turn have taken short cuts to remove important legal appeal rights to VCAT in order to bypass the local community to dump millions on tonnes of toxic soil.”