Disrespectful Veterans Minister must publicly apologise for this foolishness

No detail on ANZAC Day as more sub-branches consider cancelling 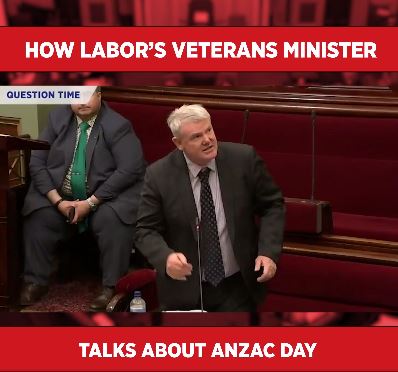 In a bizarre, offensive and insulting outburst, Victoria’s Veterans Minister has accused MPs of only taking an interest in ANZAC Day to “get a chance to get your selfie, looking all sad, where you’re putting the wreath in front of there (sic), when you push the war widows and veterans out of the way”.

It came as Mr Leane was pressed in State Parliament to guarantee he will fix delays in approving COVID plans for ANZAC Day commemorations which are threatening to force more cancellations of local marches and breakfasts.

The Minister was forced to begrudgingly withdraw by the President after several members took offence, but it’s not the first time this week Mr Leane has showed he is not fit to hold his position.

This offensive comment comes on the back of Mr Leane yesterday saying the Melbourne march would “encompass all veterans, I know there’s not many around, left unfortunately, WWI veterans…”

Our country’s last WWI digger passed away in 2009.

“He has shown in the past two days he does not have a good understanding of his portfolio and is disrespectful,” Mr Bull said.

“As and Member of Parliament, whose grandfather fought in Egypt and Palestine WWI, whose father was on the HMAS Canberra when it was sunk at Guadalcanal in WWII, whose brother served in Vietnam and who lost an uncle as part of Bomber Command over Germany, Mr Leane’s rude and disrespectful outburst deserves warrants a public apology.

“He’s lost the plot and should remove himself from the portfolio.”