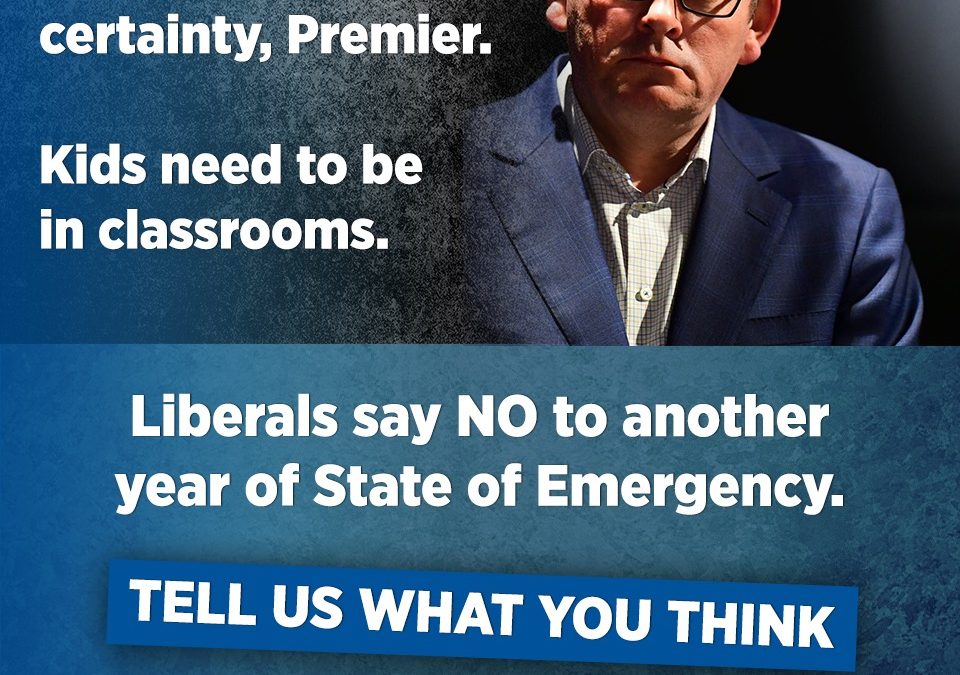 Today I made my contribution to the Public Health and Wellbeing Amendment, in brackets, (State Of Emergency Extension) Bill 2021.

That’s some mouth full, isn’t? So let’s call it for what it really is … a tool to spread fear, in brackets (without showing any evidence), destroy mental health, jobs and industry Bill.

Yet before the Victorian Parliament was a proposal to extend, yet again, the State of Emergency.

Not for one month, but for up to 21 months in total – to impact another ANZAC Day, another Easter, another Mothers Day, another Fathers Day.

People have had enough. They are tired of these politics of fear. They no longer trust the Premier when he says they are acting on best medical advice.

Like me, they have never seen this advice … the only thing that is highly infectious in their eyes is the hyperbole from a Premier who knowingly spreads fear with his rhetoric without detail.

Our side of politics realize that some of these powers are necessary but we also believe there need to be some amendments – to provide the people with the rationale behind your directions.

We simply said to the Premier show us the evidence. Help Victorians understand.

Our amendments called for more transparency –the people of Victoria deserve that.

They want to see the Labor Government’s risk assessment Matrix? I’m not talking about The Matrix movie franchise, although sometimes the Premier looks a little like the Keanu Reaves character dodging bullets in slow motion.

But sadly, it appears the only weapon in risk mitigation strategy is to lock down the entire state!

What of the other consequences – mental health. Family businesses going to the wall. What are your risk mitigation strategies for this?

The cure is killing our people; your incompetence in Hotel Quarantine has already killed 800 Victorians. Show me – show the people of Victoria, your risk assessment – something more than its Chief Medical Officer advice.

The management of this virus needs to be much more than just shutting everyone down – it is endemic now, we must learn to handle a crisis without mothballing a state.

Without throwing Victorians into a state of wide spread dismay and hopelessness!

Jade Sparks dream of starting her own business has turned into a nightmare.

She struggled like so many other health and beauty businesses during the 16 weeks of the lockdown 2.0.

She was still struggling when … in her words

“With no notice BOOM!
Another closure as Dan can’t organise a ring of steel around his precious city. Our clients are going over the border to get things done now.  I’ve lost up to $8000 which was going to help pay off our debt. I over drew my bank account yesterday to pay what I could in wages with nothing to my name but an empty salon which I can’t work in.”

A mum of an Upper Murray woman was in tears detailing her daughter’s cancer battle.

Since being diagnosed in January she has undergone a barrage of tests. The last was planned for Monday but abandoned because of your lockdown.

They are in limbo. They are frustrated. They are angry and they don’t want you to have these powers that you wield with a complete disregard for regional Victorians.

Yvonne told my team that …

Three times in the past 12 months I’ve had an overwhelming sense of total despair – the first after the Black Lives Matter protest, then the New Year’s Eve farce that shut the Border and then just last Friday with lockdown 3.0.

The impact of these lockdowns are horrible.

A Wodonga couple were holidaying on the Surf Coast last week.

They left Lorne on Friday morning and had just arrived at the 12 Apostles just after 3pm when they received a text message that their accommodation at Port Campbell had been cancelled because of Lockdown 3.0.

They had nine hours to rush home through the beautiful,
but windy roads of the south west coast, a seven-hour trip.

They risked their own lives to get home by midnight.

“And for what,” they asked me.

“We have not seen a case of COVID since this all began, and  there only 20 cases in a population of 6.3 million.

“What powers do they have to put our lives at risk?”.

I received this on Monday …

Today I was supposed to visit a clinic in Canberra to have an embryo transfer as part of my IVF treatment. This had already been delayed 12 months due to the first lockdown (our appointment was booked for 30 March 2020), which were followed by state border closures.

February was going to be my month!

I had my daily blood tests to make sure the timing was optimal, then the news of lockdown hit, not just for Melbourne, but all of Victoria, including areas that have never seen the virus.

The result was another deferment.

My heart is broken.

The lawn mower man who lost another three days’ work. He tried to get Labor’s sole trader package that they trumpeted about last year but didn’t qualify. He didn’t have a shopfront, he didn’t employ others, wasn’t registered with Worksafe and so has to wear it.

Finally, and tragically, I received a Facebook message on Monday morning.

My brother literally became end of life in the Border Cancer Hospital on Thursday afternoon.

As if our family members aren’t dealing with enough already.

My brother passed this morning at 1 am with only me there.

I am so sorry that I was powerless to prevent this happening.

But I’m not powerless now and that’s why I said no to this legislation. On behalf of the people of my electorate and I believe the entire state of Victoria I asked the Government to …

I said acknowledge our reasoned amendments …