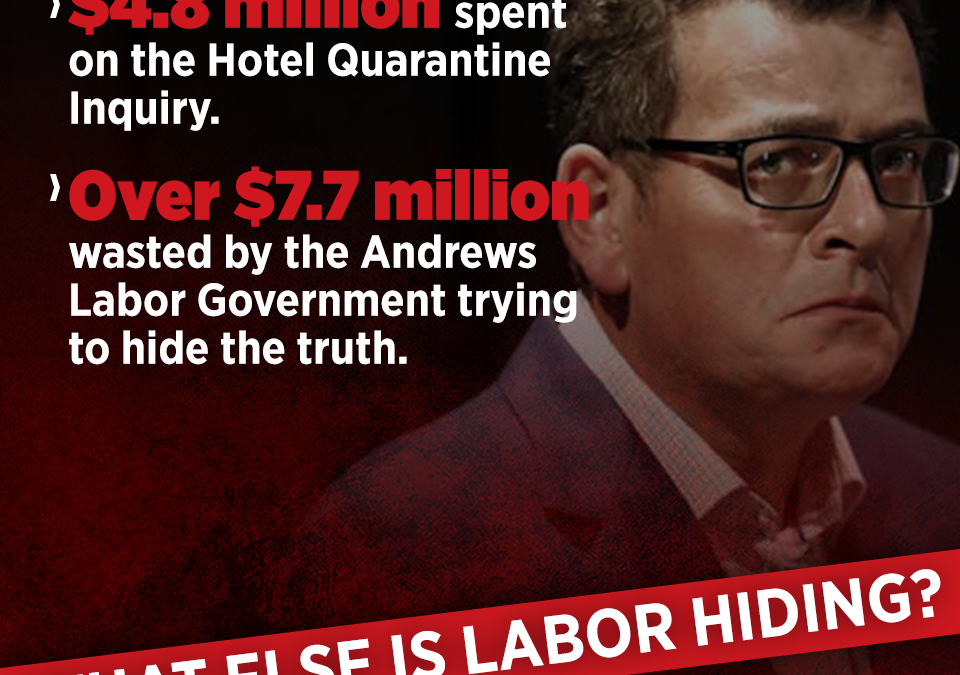 The Andrews Labor Government has wasted at least $7.7 million from the taxpayer purse covering up its mistakes and shifting blame for its disastrous Hotel Quarantine program.

Labor’s bungled Hotel Quarantine program caused Victoria’s second wave of coronavirus and resulted in 801 deaths, more than 200,000 jobs lost and millions forced to endure the harshest lockdown in the country for 111 days and has been the only state in the country to endure a second wave.

Shockingly, the Andrews Government spent more representing and protecting itself than the entire bill of the Hotel Quarantine Inquiry.

The Coate Inquiry, which sifted through tens of thousands of pages of documents, cost a total of $4.8 million.

To add insult to injury, the Andrews Labor Government has stubbornly tried to conceal how much money it wasted on legal costs. Only through persistent questioning by Liberal Nationals members of the Public Accounts and Estimates Committee (PAEC), the Committee was told:

The Andrews Labor Government is still hiding how much Daniel Andrews, Jenny Mikakos, Martin Pakula and Lisa Neville spent on legal fees.  They’ve all refused to provide those costs to the Committee.

The Coate Inquiry saw multiple government departments represented by their own separate lawyers. During the Inquiry it was pointed out that this is unusual.

Clearly, Daniel Andrews did everything in his power, spending big on defence, to avoid the truth coming out.

“These lawyers were not hired to help reveal the truth, they were paid to provide departments and bureaucrats a get out of jail free card.

“Every Victorian should be furious that Daniel Andrews has spent millions of taxpayer funds on legal defence to protect his government from being accountable.

“Andrews and his ministers have shown their true colours throughout the inquiry collectively not remembering key details around who employed private security guards over trained ADF that were on offer from the federal government.

“Victorians deserve the truth. They need to know who was responsible for the key decisions and mistakes that cost more than 800 lives, tens of thousands of jobs and dropped the boot into the Victorian economy.”