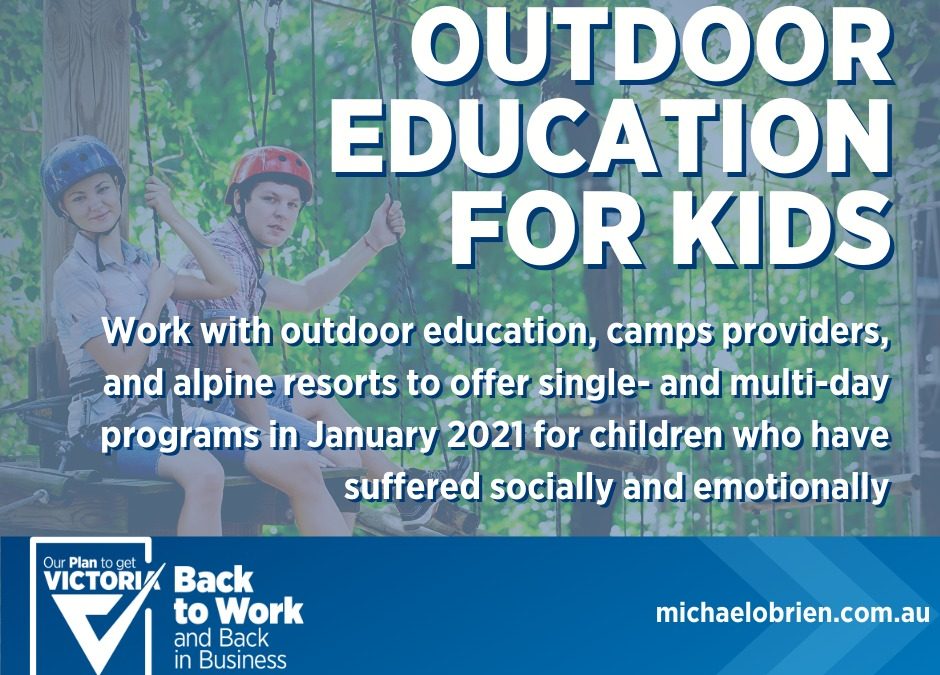 The Liberal Nationals are calling on the government to help kids get outdoors and support the outdoor education sector, which has taken a huge beating due to Daniel Andrews’ second wave.

We’re calling on the government to take up our Back to Work plan, which would propose to offer kids 3-5 day camps in January 2021 for children who have suffered socially and emotionally, and also provide incentives to schools booking camps in Term 1.

Outdoor education and camp providers have the capacity to run these camps, however during lockdown they’ve effectively shut up shop – forced to stand down staff on JobKeeper and take out loans or re-finance. It’s time they had the support to rebuild their businesses.

Our plan would provide a much needed boost for regional Victoria, especially young people. One major provider, the Outdoor Education Group, has stated 50 per cent of its staff are aged under 30 and live regionally. These people have essentially been out of work all year.

“I’ve spoken to many principals and parents, who’ve told me how isolated kids are feeling.  For almost half the year they’ve been away from their friends, missing out on learning, hanging out, playing sport and having fun.  Let’s make these school holidays something to look forward to, by offering subsidised school camps.

“Not everyone is going to afford to get away for a break in January.  I’m sure kids would jump at the chance to get outdoors, and just be kids again. Parents will be glad to have them out of the house too!

“I’ve spoken to many providers who have struggled.  From day camps to longer stay camps. They’re worried they might not be able to make it to February, with camp bookings are now only dribbling in.  This would be a terrific plan to help Victorian businesses.”