Despite claims by Daniel Andrews and Health Minister Jenny Mikakos that the Cedar Meats cluster which is growing by the day was handled “absolutely perfectly”, Victoria’s Chief Health Officer admitted on radio today that it could’ve been handled differently.

During an interview with Neil Mitchell on 3AW this morning Professor Brett Sutton said:

“I think even two linked cases is probably enough to shut a place down, and probably regardless of size.”

“Maybe we shouldn’t have waited for a third linked case, maybe for these settings, we should shut an entire place down….” 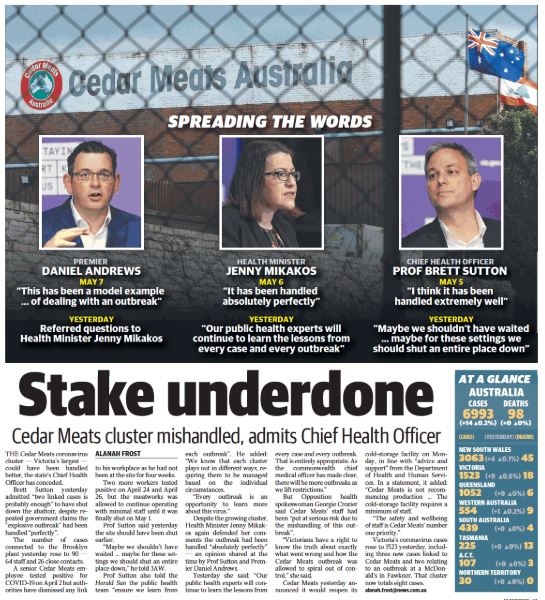 At a Parliamentary Committee hearing on Tuesday, Professor Sutton admitted that he was “agnostic” to the first case at Cedar Meats on April 2nd and the second case on April 24th being linked despite the Minister saying “unless the virus got into the car itself and went to Cedar Meats there is no way that the virus could have been connected to that worksite”.

It’s not good enough that the Minister has trivialised such a serious issue whereby now 91 Victorians have been infected by COVID19. These are Victorians who have been put at serious risk due to the mishandling of this outbreak.  Not only do Cedar Meat employees expect answers, so do Victorians.

There are simply too many unanswered questions about the Cedar Meats outbreak including why Daniel Andrews refused to name the facility which has close ties to the Labor Party.

Daniel Andrews has put politics before people with the handling of the Cedar Meats cluster, and it’s about time he dropped the arrogance and provided answers.

Victorians have a right to know the truth about exactly what went wrong and how the Cedar Meats outbreak was allowed to spiral out of control.