The Andrews Labor Government is so embarrassed by its ridiculous recommendation to heritage list the Eastern Freeway that it announced it by dropping a classified advertisement on page 37 of yesterday’s The Age newspaper, ironically next to the death notices.

Labor couldn’t bring itself to send out a media release to announce this bizarre heritage listing of a freeway.

The Minister has failed to take responsibility for this decision in the media.

He should front up and explain this ridiculous decision.

It’s hard to understand why a dirty, great big brutalist freeway, which ends in a shocking bottle-neck T-intersection at Hoddle Street, is worthy of heritage listing, while beautiful heritage homes are routinely destroyed across Melbourne’s suburbs. 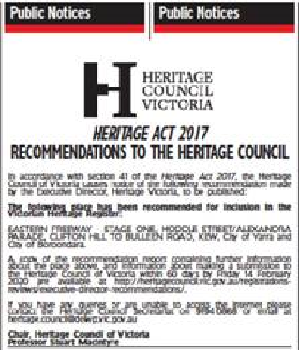 Most eastern suburbs commuters would prefer to see Stage 1 of the Eastern Freeway dramatically altered, by building a link to the Tullamarine Freeway that would improve traffic flow and solve one of Melbourne’s chronic congestion problems.

The Andrews Labor Government’s stealth-like strategy to heritage list this freeway is a devious attempt to booby-trap any future development of the East West Link.

The Federal Liberal Government has $4 billion on the table to build this vital new piece of infrastructure and help commuters spend more time with their loved ones and less time stuck in traffic.

Page 19 of the Heritage Victoria report reads: “The Executive Director must not make a recommendation for any categories of works or activities if he considers that the works or activities may harm the cultural heritage significance of the place or object.”

These so-called experts believe this freeway has cultural heritage … just think about that.

In plain speak, aside from maintenance, the document makes it very clear that any potential alterations to the Eastern Freeway, near Hoddle St, would require heritage approval.

“The Eastern Freeway is a dirty, great, big freeway – how on earth does it warrant heritage protection?

“So-called heritage experts who work for the Andrews Labor Government are more than happy to see beautiful heritage homes in established suburbs destroyed – yet they go to this bizarre extent to protect the Eastern Freeway?

“This ridiculous decision, announced by stealth in the classifieds section of The Age, next to the death notices, will make a much-needed East West Link far more difficult to construct.

“Where is the perpetually asleep Planning Minister Dick Wynne? He’s hiding under his doona – refusing to be accountable for this bizarre decision.”