Half of the state’s V/Line services have failed to meet their punctuality targets every month for the past two years, a new analysis of data by the State’s Opposition shows, says Shadow Minister for Regional Transport Steph Ryan.

Commuters on five lines – Bendigo, Gippsland, Ararat/Maryborough, Albury-Wodonga and Bairnsdale – have been late every month since September 2017, while Ballarat commuters were on time just one month out of 24.

The Bendigo, Gippsland and Ararat lines have not run on time for three years, while the Bairnsdale train hasn’t been on time since at least August 2014.

Shadow Minister for Regional Public Transport and Deputy Leader of The Nationals Steph Ryan said worsening problems meant it was impossible for commuters to have confidence in Victoria’s rail network. 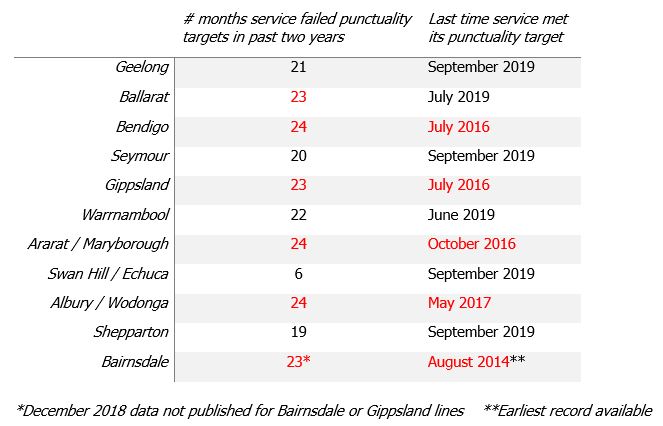 “Labor is ignorant of the thousands of Victorians who are inconvenienced on a daily basis by delays, breakdowns and cancellations.

“V/Line punctuality is getting worse, not better, because the Andrews Labor Government refuses to make the investments needed to make our regional trains run on time.”

The Andrews Labor Government invested just four per cent of the capital funding for public transport in this year’s State Budget into regional Victoria this year.