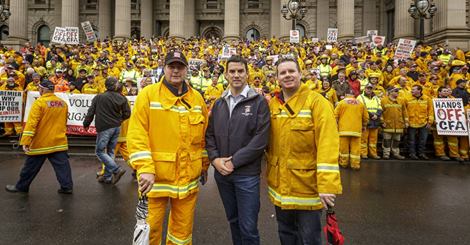 A leaked copy of the CFA’s Annual Report shows that under Daniel Andrews wages have blown out by $100 million and volunteer numbers are the lowest since 2006, says Shadow Minister for Emergency Services, Brad Battin.

The report highlights the chaos gripping the CFA under Daniel Andrews and Labor with only 38 per cent of current staff backing senior management’s efforts to provide clear strategy and direction for the organisation.

A further three out of 10 staff did not plan to stay at the CFA and only 59 per cent were satisfied with their jobs, and a disturbing 22 per cent of CFA employees were experiencing bullying.

“Daniel Andrews’ war on CFA volunteers has left Victoria with its lowest level of volunteer firefighters in over a decade, with volunteer numbers dropping to just 34,380, which is 5,000 short of the CFA’s own volunteer target.

“Despite experts warning that during the upcoming fire season parts of Victoria face the most dangerous conditions in years, Daniel Andrews has left the CFA in absolute chaos, placing the lives and property of Victorians at risk.

“For 5 years Daniel Andrews has been at war with the CFA and the cost of the war is now clear, over $100 million in cost blowouts and fewer volunteers to protect the community.”