The Andrews government has known about this crisis for almost 5 years and until now has done absolutely nothing to address it. As a result of Labor’s reckless spending and inability to save for this eventuality, future homeowners will pay the price for the failure of this government and its building regulator the Victorian Building Authority (VBA).

By increasing the cost of building permits for new homes Daniel Andrews will be putting further pressure on Victorians already struggling to balance the family budget with skyrocketing power bills and new and increased taxes under his government. 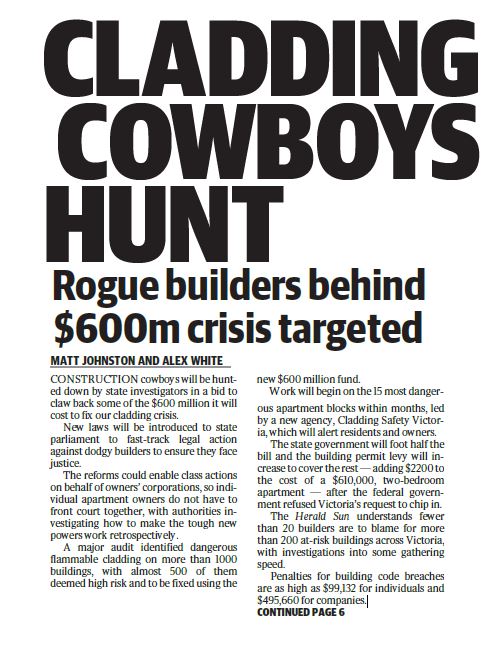 Despite Labor’s claims of their program being a ‘world-first’, the Conservative government in the United Kingdom announced in May this year a funding package of approximately $360 million for the removal of cladding from 170 buildings.

Labor’s $600 million announcement is just a drop in the ocean to rectify an unknown number of buildings.

Daniel Andrews said around 500 buildings need to have combustible cladding removed, however, Matt Vincent from the Victorian Cladding Taskforce told 3AW it is over 800, while the Government’s media release carefully avoided mentioning any number at all.

Victorians are demanding action from Daniel Andrews. They don’t want the Premier once again looking to pass the buck to try and fix a problem that he can’t even accurately describe.

Labor has been in government for 16 of the last 20 years, so rather than looking to blame the Federal Government, state Labor must step up and take responsibility for this massive failure of its own regulator, the VBA.

Victoria must have a Parliamentary Inquiry into the failings of the VBA, with a view to improving the regulatory processes in the building industry and to ensure something like this never happens again.

Once again, Daniel Andrews and Labor have failed to address the enormity of Victoria’s cladding crisis and as a result, Victorians will be forced to continue living in homes that are potentially deadly fire traps.