Great idea, pity about the rollout

My Op-Ed piece in The Border Mail

Blessings of unicorns and a sprinkling of fairy dust. These are proving to be the hallmarks of the Victorian Labor Government policy rollout.

Time after time programs that should be a winner with the community are failing the pub test, falling over when applied to the real world and costing jobs and hard earned cash. 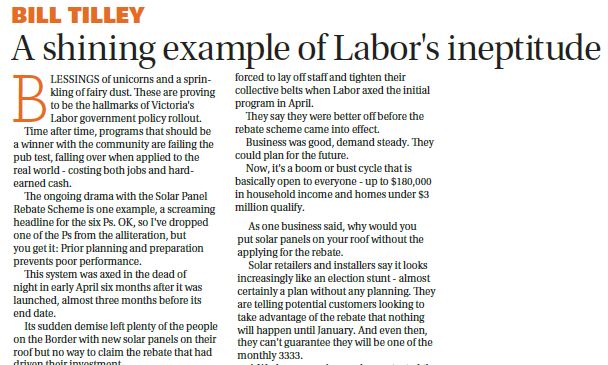 The ongoing drama with the Solar Panel Rebate Scheme is one example, a screaming headline for the six Ps. Okay, so I’ve dropped one of the Ps from the alliteration but you get it –Prior Planning and Preparation Prevents Poor Performance.

This system was axed in the dead of night in early April, six months after it was launched, almost three months before its end date.

Its sudden demise left plenty of the people on the Border with new solar panels on their roof but no way to claim the rebate that had driven their investment.

They now needed pre-approval, but these people had panels on their roof barring them from applying altogether.

It took six weeks, questions in Parliament and lobbying for Labor to accept that they had done the wrong thing. They loaded up the newly appointed chief executive of Solar Victoria to perform the mea culpa – announcing a period of grace for those caught in the void.

More importantly a new scheme would begin on July 1 with more solar rebates than ever, chortled the Minister for Solar Homes Lily D’Ambrosio.

The Minister for Sun and Energy’s new plan was capped at 3,333 a month. It was exceeded in less than 72 hours.

Border businesses are now looking north of the river because they can’t manage the uncertainty of the solar rollercoaster in Victoria – a scheme that creates mass panic for a couple of days and silence for the rest of the month.

These are the same businesses that were forced to lay-off staff and tighten their collective belts when Labor axed the initial program in April.

They say they were better off before the rebate scheme came into effect.

Business was good, demand steady. They could plan for the future. Now it’s a boom or bust cycle that is basically open to everyone – up to $180,000 in household income and homes under $3 million qualify.

As one business said why would you put solar panels on your roof without the applying for the rebate.

Solar retailers and installers say it looks increasingly like an election stunt – almost certainly a plan without any planning.

They are telling potential customers looking to take advantage of the rebate that nothing will happen until January and even then they can’t guarantee they will be one of the monthly 3,333.

A Wodonga pensioner who contacted the office this week says he too thought he was doing the “right thing” by looking to apply for the rebate. He missed out and it seems no one can tell him where he sits in the queue, or how long he will have to wait.

He and his wife can’t afford the full cost of the solar panels – without the rebate he doesn’t know where he stands, how he will pay for it.

Yet another Wodonga man was a victim of the first scheme’s sudden demise. His panels went on the roof the day they cut the scheme off. He has applied under the grace period scheme announced in May. He was told he’d get an answer in two weeks. He is still waiting.

This isn’t a one-off. Repeatedly we are seeing a good plan, poorly executed.

Free TAFE courses is another case of “good idea, forgot about the planning”.

The Minister won’t tell us what courses the claimed 470 new students at Wodonga TAFE are doing. Apparently it’s “commercial in confidence”. Industry say they weren’t consulted and now some TAFEs are refusing to accept enrolments because they can’t find jobs for the students in these course, whatever they might be.

Back in February I asked the Health Minister just how many of much publicised specialist appointments, nurses and GPs for regional areas were coming to Benambra. Again, white noise but no detail.

Just this week we saw Labor shutdown the train network in Melbourne for a big maintenance push only to find that the construction union had planned a rostered day off.

“Once is a mistake, twice is a pattern and three times a habit” they say.

Daniel Andrews was elected to govern, not to rule and his team needs to take heed of these systemic failures and listen to what real people in our community are saying about the practicalities of these programs.

He needs to think through these plans rather than just marvel at the ideology.