Our plan for better fishing for all Victorians 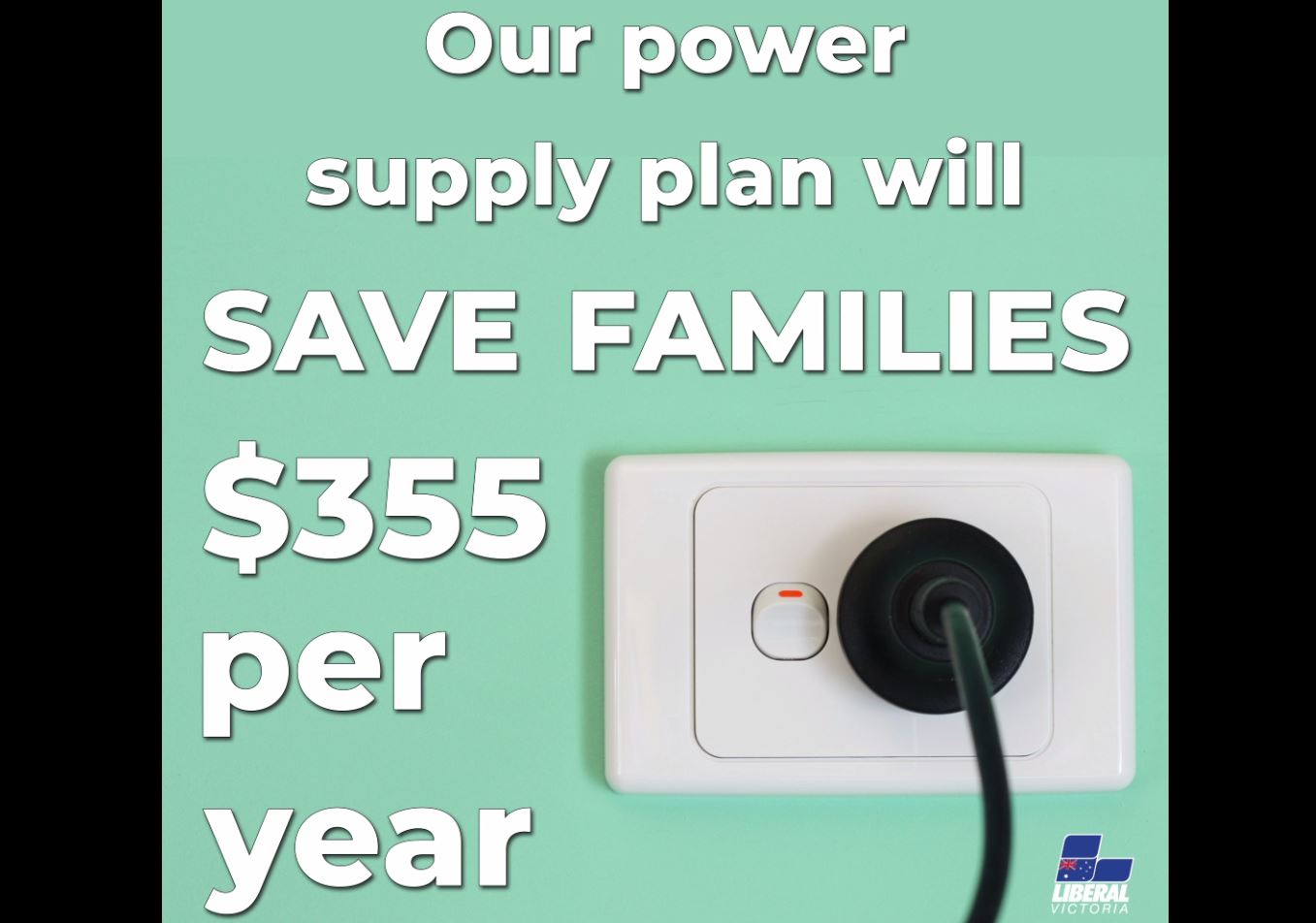 With the cost of power now out of control, a Liberal Nationals Government will facilitate the construction of a new Victorian power station of at least 500MW to cut the cost of soaring electricity prices.

Packaging up major government services such as rail; hospitals and other major services, a Liberal Nationals Government will seek a tender for a new 500 MW contract of supply, allowing the market to best determine the mode of generation.

The government tender will also allow the winning bid to expand on this contract to beyond 500 MW.

It is clear that Daniel Andrews has lost control of electricity and gas costs. After tripling the brown coal royalty rate to grab an extra $252 million from Latrobe Valley power generators – Hazelwood closed down and power prices soared. Victorians have been suffering with out of control electricity prices ever since.

Hazelwood operator Engie faced an $87.5 million tax bill from Daniel Andrews because of the changes, forcing the power station to announce its early closure in November 2016 and shutdown within 5 months in March 2017. Hundreds of families lost their primary income as Hazelwood prematurely closed.

In discussing Daniel Andrews’ brown coal royalty rate, the then owner of Hazelwood, Engie, described the increase as “surprising and disappointing” and said it would “have a detrimental impact on the region’s energy sector”.

On the Neil Mitchell program on 3 November 2016, Daniel Andrews said in relation to the impact of Hazelwood’s closure on Victorian households: “any increase will cause pressure on household budgets, I acknowledge that. But the numbers are more in the order of 4% or 85 cents a week.”

Daniel Andrews was either wrong or he lied. Either way, he can’t be trusted on energy costs.

The number of Victorians to lodge complaints about disconnections form their electricity has risen by over 82% between December 2017 and June 2018.

According to research by St Vincent de Paul’s, under Daniel Andrews electricity prices have risen by around $450 and gas prices have increased by around $500.

Add to that the nine new taxes that Daniel Andrews has already introduced and it’s no wonder most Victorians feel they’re losing control of their personal finances.

That’s why a Liberal Nationals Government will put the supply of at least 500MW of new electricity generation out to tender which will secure the construction of a new power station.

This new privately owned power station will supply energy requirements of government services such as hospitals and rail networks via the 500MW contract.

This extra supply of energy into the market coupled with utilising the government’s buying power will drive down retail electricity prices. As part of the competitive tender process a contract price will be established to lock in the best deal for Victorian taxpayers.

Independent modelling by Frontier Economics shows the construction of a new 500MW station will save average households around $355 a year, small businesses around $860 and larger ones around $1,720 a year.

Everyone knows that Labor and the Greens want to close the Yallourn power station. Based on the modelling by Frontier Economics of Daniel Andrews’ approach to energy it is their opinion that, in all likelihood, Yallourn will shut down in the next few years.

That’s why a Liberal Nationals Government will work with AEMO to create a reliability standard to keep Yallourn operating until its expected closure in 2032.

Only an elected Liberal Nationals Government will get back in control of cost of living pressures.

A Liberal Nationals Government will cut household water bills by up to $100 a year, provide free school books for secondary students in government schools, put more gas supply into the market to cut prices, cut car registration by $295 for Red P Platers and cut energy costs for low income households by up to $530 a year through a special energy rate.

Comments attributable to Leader of the Liberal Party, Matthew Guy:

“Daniel Andrews has lost control of electricity and gas prices and its hurting Victorians.

“Every time Daniel Andrews cuts a deal to appease the Greens, it means more taxes that costs Victorian households.

“Every Victorian knows that Daniel Andrews can’t win government without the support of the Greens which means more taxes and higher electricity and gas prices.

“Building a new power station in Victoria will mean lower prices for the long term which is going to save households and businesses hundreds of dollars every year.

“A Liberal Nationals Government will get back in control of electricity and gas prices and ease the squeeze on household budgets.”

“Daniel Andrews has lost control of energy costs with some Victorian households now paying around $950 more.

“You don’t need a crystal ball to know that a vote for Daniel Andrews and Labor means a deal with the Greens which will mean even higher electricity costs for homes and businesses.

“Only a Liberal Nationals Government will get back in control of energy costs.”