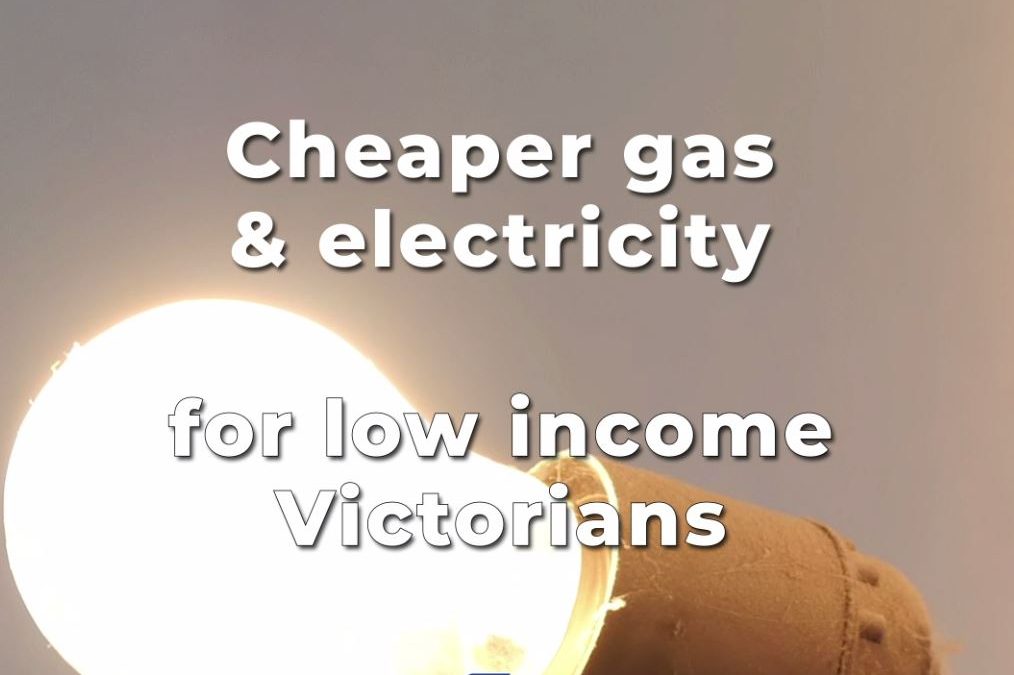 A Liberal Nationals Government will use ‘people power’ to deliver cheaper gas and electricity costs for low income earners.

Daniel Andrews has lost control of electricity and gas costs.

The number of Victorians with electricity disconnection cases has risen by over 82% between December 2017 and June 2018.

Recent reports by the Essential Services Commission show that some Victorians may be paying as much as $1,000 more this year for their electricity and gas. Separately, St Vincent de Paul released a report saying that average annual household electricity costs are around $2,300 a year, an increase of approximately $300 from the previous year.

Add to that the 12 new or increased taxes under Daniel Andrews and it’s no wonder most Victorians feel they’re losing control of their personal finances.

That’s why an elected Liberal Nationals Government will use ‘people power’ to organise discounts by using the purchasing power of over 910,000 low income earners to help them get back in control of cost of living pressures.

A Liberal Nationals Government will organise a tender for a retail electricity and gas deal to be made available to Victoria’s 912,364 low-income and vulnerable government concession recipients – on most recent data.

This would be very similar to the system that operates successfully in South Australia. In July 2017, the South Australian Government announced it would tender for a retail energy deal on behalf of the state’s more than 160,000 concession recipients. Origin Energy won the tender and delivered a retail energy plan which offered low income participants a guaranteed 18% discount on electricity and 11% on gas. The deal is reported to deliver savings for households on standing offers of between $253 and $531 off their annual electricity bills.

An elected Liberal Nationals Government will help low income earners get back in control of their energy costs by delivering a discounted retail electricity and gas deal which will be made available on an opt-in basis for all concession households.

As part of the tender, we will look for energy retailers that provide consumers with flexible payment options, no late payment fees or penalties, and no exit, paper, or credit card fees.

“Under the deal we will strike with electricity providers, low income earners will be looking at savings of around $250 to $530 a year.

“Daniel Andrews has lost control of energy costs and its hurting Victorians.

“Our deal is going to help over 910,000 Victorians to get back in control of their energy bills and leave more money in their pocket.”

On top of an up to extra $1,000 a year for electricity and gas, Daniel Andrews also slugged Victorians with 12 new or increased taxes.

Only a Liberal Nationals Government have a plan to help low income earners get back in control of their energy bills.”