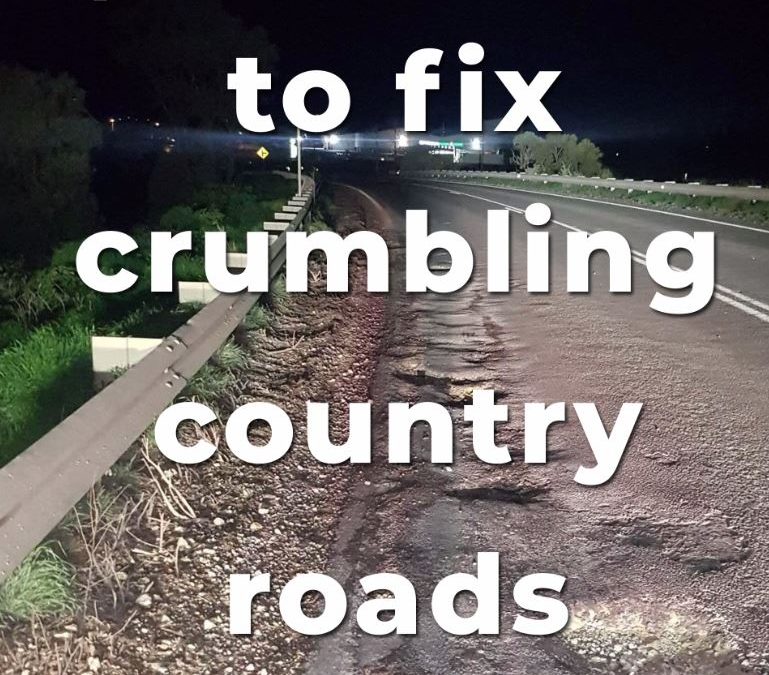 A Liberal Nationals Government will invest $1 billion over ten years in a new Road Fix Blitz program to fix our country and regional roads.

Daniel Andrews and Labor’s neglect of our regional roads is putting the lives and safety of Victorians at risk every day.

Labor has been in government for 15 of the last 19 years and have allowed our regional roads to fall into dangerous disrepair while they wasted taxpayers’ money on tearing up the East West Link contract for $1.3 billion, the desalination plant and Myki.

In 2017 there were 156 road fatalities on rural and regional roads which made up 60.2% of all Victorian road deaths that year. In the year to date, there has been 84 road fatalities in regional Victoria which is just over 50% of fatalities across the state.

It is an unacceptable situation that regional Victoria has around 20% of the state’s population but over 50% of road fatalities occur on country roads.

The $1 billion Road Fix Blitz will also invest to improve roads before they begin to break down which will save lives and save taxpayers in the long run. This approach has been supported by the Auditor-General.

Under this project, VicRoads will develop a program of works each year based on input from community and stakeholders.

The Country Roads & Bridges program is dedicated to fixing roads managed by regional councils.  The $400 million for targeted road restoration is about strategic investment in restoring roads before repairs become critical – this program will be managed by the Victorian Government in consultation with the local community.

The $200 million investment in general road maintenance is another program managed by the Victorian Government focusing on running repairs informed by information provided by a new smart phone App but also with input from local government.

An elected Liberal Nationals Government will commission a new smart phone App for the real-time reporting of road hazards or locations where there has been a sudden and dangerous degradation. This will improve response times for urgent repair work to minimise the danger of accidents that result in injury or worse.

The Road Fix Blitz program will be in addition to existing road maintenance and restoration initiatives delivered by VicRoads.

Only a Liberal Nationals Government will get back in control of maintaining country and regional roads.

“That’s why I have a plan to spend $1 billion on fixing country and regional roads as well as building High Speed Rail across Victoria, reaching speeds of up to 200 kmh, which will get more people off regional roads and onto trains.”

Comments attributable to Leader of The Nationals, Peter Walsh:

“No more patch-up jobs, but proper fixes to get back in control of regional road maintenance.

“Before the last election Daniel Andrews claimed the East West Link contract wasn’t worth the paper it was written on and that lie cost taxpayers $1.3 billion.

“It’s unforgiveable that Daniel Andrews wasted $1.3 billion that could have been spent on improving the safety of regional roads.”

“Daniel Andrews and Labor have lost control of maintaining the safety of our regional roads.

“Labor have been in government for 15 of the last 19 years while country roads have fallen into disrepair, putting lives and safety at risk.

“When a Mayor of a regional city recently asked the Andrews Labor Government for more support to fix deadly local country roads, Labor’s Roads Minister said the funding provided was “better than a kick in the d**k”.

“Saving the lives of motorists on regional roads is a serious issue and yet the Andrew Labor Government’s response is to make crude and offensive ‘jokes’.”