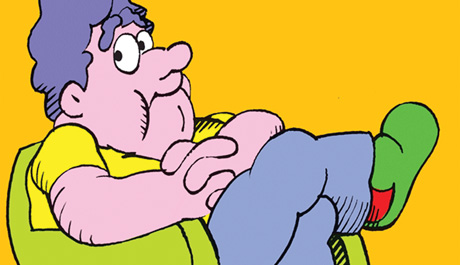 A Liberal Nationals Government will bring Norm and his family from ‘Life. Be in it.’ out of retirement to have a starring role in an exciting new Victorian Government positive health promotion campaign.

It’s never been harder to find the time to exercise and keep fit. Melbourne’s out of control population growth means we are spending more time stuck in traffic congestion and less time for rest and recreation.

Victorians know that prevention is better, and cheaper than a cure.

That’s why a Liberal Nationals Government will put in place a much needed positive health promotion campaign incorporating the iconic Norm and ‘Life. Be in it.’ brands.

‘Life. Be in it’ is one of the most widely recognised positive lifestyle messages in Australia and encourages the broad population “to be more active” and “live more of your life”.

The initiative began in 1975 under Brian Dixon who was Victorian Minister for Youth, Sport and Recreation.

Norm and ‘Life. Be in it.’ are great and enduring brands that still have high levels of recognition. Rather than reinvent the wheel and create an entirely new brand it makes sense to update and revitalise these iconic characters.

The Liberal Nationals have a plan to decentralise Victoria’s population and take the pressure off Melbourne’s roads and transport. That means less time travelling and more time for rest, recreation and exercise. But as that process of decentralisation takes place, we have no time to lose in trying to support, encourage and motivate Victorian families to keep active and healthy.

A Liberal Nationals Government will help families to be active and healthy by rebooting ‘Life. Be in it’ and incorporating the lessons of the successful Healthy Together Victoria initiative in a new long term health promotion campaign.

“Life. Be in it. was iconic in the 70’s and 80’s and we will revitalise Norm and his family to make sure all Victorians get the message about the benefits of leading a fit and active life.

There are so many pressures on families today, we want to help make sure that being active and healthy can be a priority as well.

With half of all adults and a third of all kids in Victoria overweight or obese, a comprehensive and sustained campaign to promote the benefits of being fit and healthy is desperately needed.”