No checks or balances on suburban rail loop 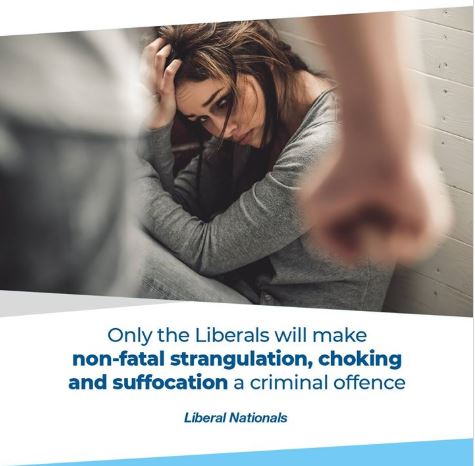 THERE is no single solution to something as complex as family violence but stronger sentencing laws will put offenders behind bars for longer and send a strong message of zero tolerance.

That’s why a Liberal Nationals Government will legislate to amend the Crimes Act to make non-fatal strangulation, choking and suffocation in a domestic setting a criminal offence punishable by up to 10 years jail.

In many family violence cases hands are often a weapon.

People who commit non-fatal strangulation of an intimate partner are more likely to go on to commit a major assault, attempted murder, or murder. The Queensland Government recently made strangulation a serious personal offence with a maximum penalty of seven years jail.

Under this law the actions must be committed against a person who is a family member.

A Liberal Nationals Government will seek expert advice to ensure that the proposed offence is wide enough to cover all harm resulting from such acts.

Attributed to Leader of the Opposition, Matthew Guy:

“For gutless people that physically assault their own family, tougher jail sentences are usually the only language they understand.

“I have a zero tolerance approach when it comes to family violence and a Liberal Nationals Government will work tirelessly towards that goal.”

Attributed to Shadow Minister for the Prevention of Family Violence, Georgie Crozier:

“Daniel Andrews’ answer to the scourge of family violence has been too focused on bureaucratic responses.

“We need measures that will save women’s lives.  A stand-alone offence will send a strong message to perpetrators that controlling, violent behaviour is not only unacceptable but will feel the full force of the law.”

“There is no single solution to something as complex as family violence but these tougher sentences will help save lives and lock away offenders.

“This is landmark legislation to further strengthen the state’s response in domestic and family violence.

“The Liberal Nationals will always put the rights of victims first and keep Victorians safe.”