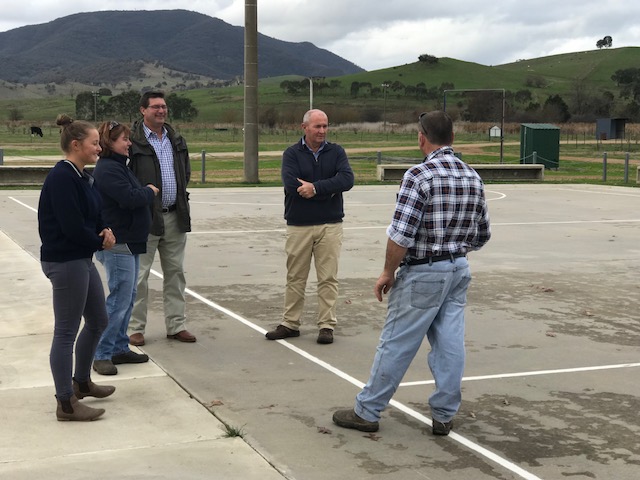 A Liberal Nationals Government will deliver new and improved netball courts to the Cudgewa Recreation Reserve as part of a $200,000 makeover, says member for Benambra Bil Tilley.

The Cudgewa Football Netball Club has a strong presence in the Upper Murray League with five netball sides as well as an oversubscribed junior program.

The netball facilities currently fail to match those standards with one concrete court where teams train in tandem under poor lighting and warmup on match day on the gravel car park.

An elected Matthew Guy-led Government will repair and resurface the existing court to Netball Victoria standards, build a second court, improve the lighting for both and develop a playground linking the courts to the clubrooms and football ground.

“The Andrews Labor Government has abandoned grass roots sport in favour of a $225 million gift to the AFL to develop a ballroom at Etihad Stadium.

“Bill Tilley tells me sporting clubs in the electorate are doing an incredible job with the limited resources and outdated facilities they currently have.

“We hear that message and that’s why a government I lead will put the money earmarked for Etihad Stadium into clubs like Cudgewa and its netball courts.”

“We know the spirit and determination that drives this club and its proud tradition dating back to 1893.

“In 2014, it was a Liberal Nationals Government who redeveloped the Cudgewa clubrooms for both the football and netball teams that are now a “Blues” print to clubs in this league and others.

“With a Liberal Nationals Government, I’m proud to deliver this commitment to the Upper Murray.”

“We’re so excited – this means no more warming up in the mud, finishing training after 9pm at night or risking life and limb under poor lighting.

“It means families, which are the lifeblood of clubs like ours, can train and play without having to juggle commitments and ferrying kids to and from the ground at all times of the day and night.”