No Energy price cuts, no jobs — Minister can’t explain either 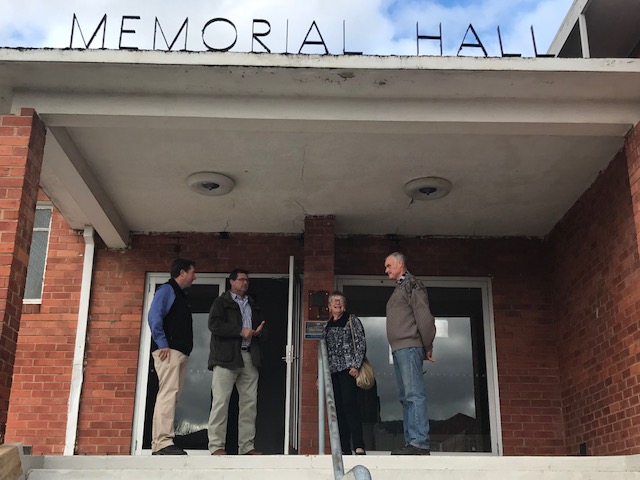 A Liberal Nationals Government will deliver a $250,000 makeover of the Corryong & District Memorial Hall if elected in November.

The site has been the focal point of activities for Corryong since 1882 when the first hall was built. Working bees made up of families from the valleys, school and towns were part of the crew that built the existing hall in 1959 with 155,000 locally made bricks and more than “four miles” of local timber.

Today more than 3500 locals use the venue each year in sporting pursuits ranging from basketball to indoor bowls. It is also the venue for Debutante Balls, art shows, school performances, Anzac Day services, elections and acts as the focal point of the Man From Snowy River Festival art exhibition.

After years of neglect by the Labor Government the roof is failing, water can flood the hall.

A Matthew Guy-led Government will replace the leaking roof and ceiling as well as bringing the kitchen and amenities into the 21st Century. It is our commitment to the community and culture that built and continues to use the Corryong & District Memorial Hall.

“This hall has been deteriorating under the watch or more accurately neglect of the Andrews Labor Government.

“Bill Tilley has been listening to the community and working hard with our team to deliver more local funding. He has refused to take ‘no’ for an answer for his local community of Benambra.

“Community projects like this are the fabric of regional and rural Victoria and a government I lead won’t ignore those needs.”

“This is a great project that I hope to deliver for the people of Corryong.

“It’s a project I’ve been working on with the committee for several years and had we remained in government in 2014 it would have already been done.

“But this city-centric Daniel Andrews Government wouldn’t be able to find Corryong on a map let alone visit and see the state of the hall.”

“This hall means an enormous amount to the Corryong Community.

“This election commitment is a real shot in the arm for us here in Corryong, the fact the Liberal Nationals are prepared to invest in our community is a great confidence boost for our town.”