Ice injecting room only open for business during school hours 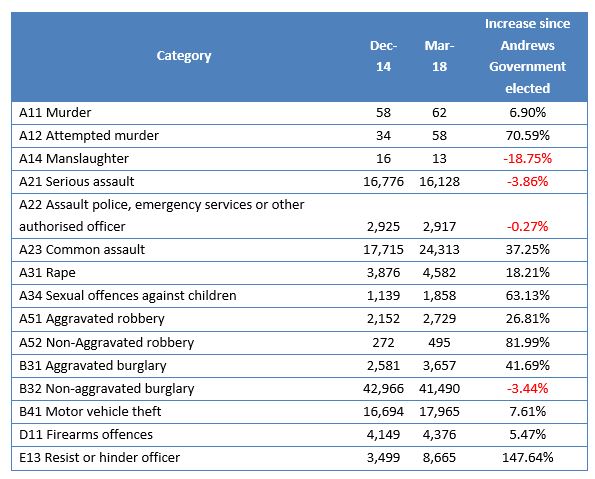 WHILE Daniel Andrews keeps on spinning about crime statistics, Victorians are less safe under his government.

Yesterday’s crime statistics show that since Daniel Andrews has been Premier, total crime including assaults and other violent offences are up 9.5%.

In the nearly four years of the Andrews Government, attempted murder and manslaughter is up 42%, burglary and break and enter is up 33% and assaults are up 17.2%.

The numbers don’t lie, even if Daniel Andrews does.

While Victorians are less safe with increases in numbers of violent crimes, NSW is experiencing dramatic declines in crime rates.

Daniel Andrews can keep on spinning all he likes, but only Matthew Guy and the Liberal Nationals are offering real action.

The Liberal Nationals have a clear plan to make Victoria safe:

At the next election Victorians will have a clear choice between more of the same soft approach from Daniel Andrews or the Liberal Nationals plan for mandatory minimum sentences, more police on the beat, a public sex offenders register and tougher parole and bail laws.