Murray Basin Rail grinds to a halt under Labor

Labor’s plan for sport: take from the poor to give to the rich

What is Daniel Andrews’ plan to protect Victorian irrigators? 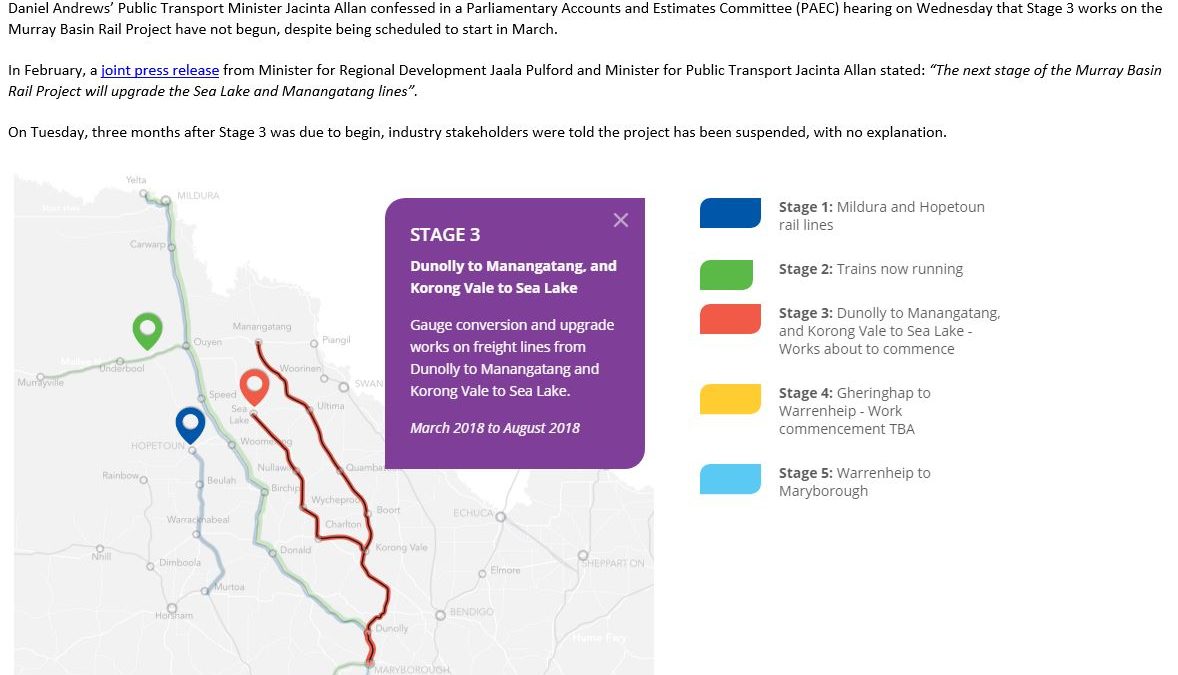 Public Transport Minister Jacinta Allan was caught out at the Public Accounts and Estimates Committee (PAEC) hearing at Parliament House on Wednesday, and was forced to admit the vital freight upgrade project had ground to a halt under Labor.

Under questioning from The Nationals Member for Gippsland South Danny O’Brien, Ms Allan confessed Labor had secretly shelved plans for the next stage and would instead prioritise Ballarat passenger upgrades ahead of completing the next stages of the Basin Rail project.

Stage 3 was scheduled to begin in March but Ms Allan confirmed the “project has had its scope changed” and that the works on the Manangatang and Sea Lake lines had not started.

On Tuesday the Andrews Labor Government was quietly notifying stakeholders that the Manangatang and Sea Lake upgrade plans will be paused – indefinitely – without explanation.

The Premier for Melbourne is stopping critical freight rail upgrades in favour of Ballarat line passenger services – this city-centric Labor Government just doesn’t get it.

Industry and stakeholders had planned for this work to begin in March, but instead they’re hearing three months later the work won’t go ahead.

It’s clear Daniel Andrews and Jacinta Allan have no plans to make sure the MBRP is delivered on-time and by the end of the year.

Daniel Andrews and Jacinta Allan had an opportunity to come clean yesterday, but it’s only because of questions raised by industry and The Nationals that Labor’s deception has been exposed.

The Basin Rail project is designed to deliver critical upgrades to the freight rail network and open north-west Victoria to our state’s ports and the rest of the world.

Freight industry and our communities that rely on agriculture and mineral sands to support their regional economies deserve an explanation.

This is another sneaky, city-centric move that again confirms regional communities like Mildura can’t trust Labor’s Premier for Melbourne.