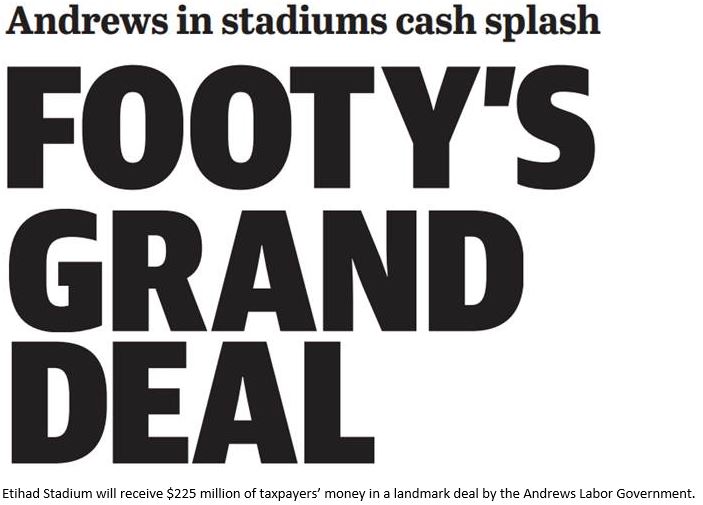 YESTERDAY in the Public Accounts and Estimates committee, Tim Pallas admitted that he had no idea of the value of the harbour side land gifted by the Andrews Labor Government to the AFL for its new headquarters.

In its rush to hand over taxpayers’ money to the AFL, not only has the Andrews Labor Government not bothered to work out the value of the harbour front land it has gifted to the AFL, but it failed to undertake a cost benefit analysis on the whole deal.

In addition to the free harbour side land, the Andrews Labor Government has also handed over $225 million to the AFL to renovate its Etihad Stadium asset.

There was a time in opposition when Daniel Andrews and Tim Pallas believed business cases and cost benefit analysis were essential.

There will be plenty of community organisations now wondering why the government hasn’t gifted them prime land worth – apparently – millions of dollars.

Daniel Andrews and Labor have given a free to kick to the AFL while grassroots sporting clubs will be forced to take out interest-bearing loans from the government for much-needed upgrades like female changerooms and toilet blocks.

Daniel Andrews wants to give over $225 million of taxpayers’ money to the AFL.

The Liberals and Nationals believe in investing that money in grassroots sport.