Andrews goes to war with Catholic and independent schools

THE comments from Treasurer Tim Pallas in his Budget Speech this week that “Victoria is the safest it’s been in a decade” are simply untrue, says Shadow Minister for Police Edward O’Donohue.

Under Daniel Andrews, crime is up nearly 10%, with many of the serious crime categories are up by much more with common assault up 36.60%, aggravated robbery up 29.55%, aggravated burglary up 45.60%, while crime in Victoria’s prisons and youth justice facilities has increased by more than 130%.

The corrections crisis also continues under Daniel Andrews with recidivism stuck above 40% and key measures for offender work hours, prison service agreements and the rate of prisoner participation in education, all below target. 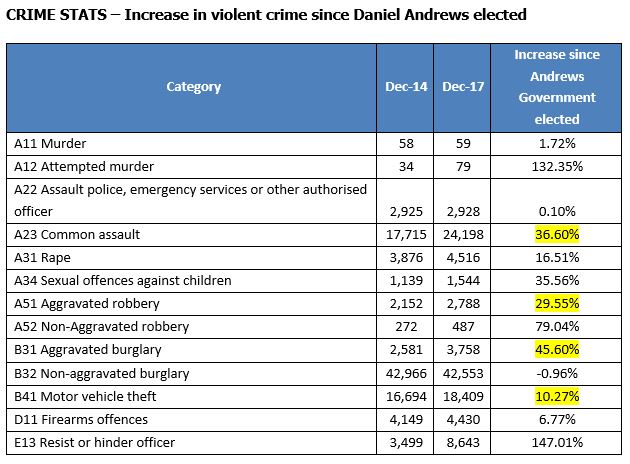 The Budget confirms the clear choice that Victorians will have at the November election – more of the same soft on crime revolving door justice from Daniel Andrews, or a Mathew Guy Government that will get tough on crime.

A Liberal Nationals Government will back our police, reintroduce the Police in Schools program, establish Police Shopfronts, introduce a Public Sex Offenders Register and restore order to the corrections system.