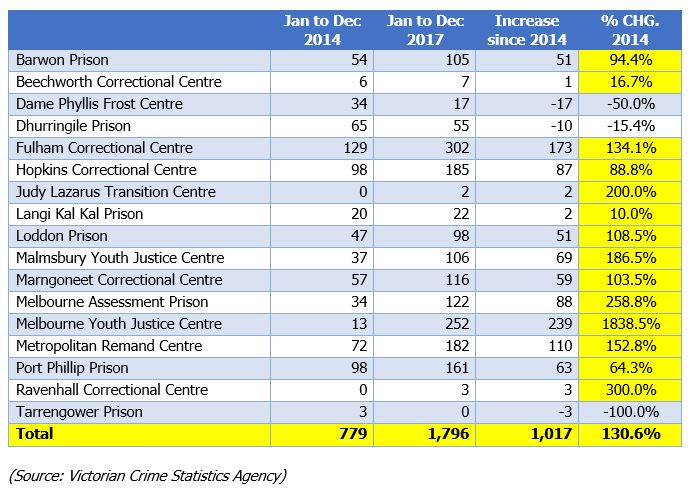 The recently released Crime Statistics Agency (CSA) data for crime in Victoria’s prisons and youth justice facilities show crimes committed behind bars have risen by 1,017 since 2014. This is an increase of 131%.

These crimes includes assaulting and injuring prison staff, rioting, smuggling of drugs and assaulting other prisoners.

Under Daniel Andrews, more than twice as many crimes are being committed in prisons than they were when he took office in 2014.

This data confirms what Victorians already know, our justice system is a shambles under Daniel Andrews.

Rising crime whilst in custody not only disrupts the management of the system, it’s an enormous diversion of police resources from front line activities to fixing Daniel Andrews’ mess.

Victorians want their police engaged with the community, solving and preventing crime, not playing back up jailers because the corrections and youth justice ministers are incapable of doing their jobs.

“Daniel Andrews has lost control of our justice system.

“Whether it’s bail, parole, sentencing or keeping order in our prisons, Daniel Andrews has failed at them all.

“There is no respect for the law under Daniel Andrews, he’s simply too weak to keep control.

“Only the Liberal Nationals will introduce the tough on crime laws to strengthen our justice system and restore respect.”

Attributable to Shadow Minister for Families and Children, Georgie Crozier:

“We need a youth justice system that keeps the community safe and doesn’t allow violent youth thugs to terrorise and harm.

“Daniel Andrews has lost control of youth justice with more violent riots in our youth justice system than any other time in Victoria’s history.

“There should be consequences for any breaches by young offenders in youth justice, not more excuses like we keep getting from Daniel Andrews.”