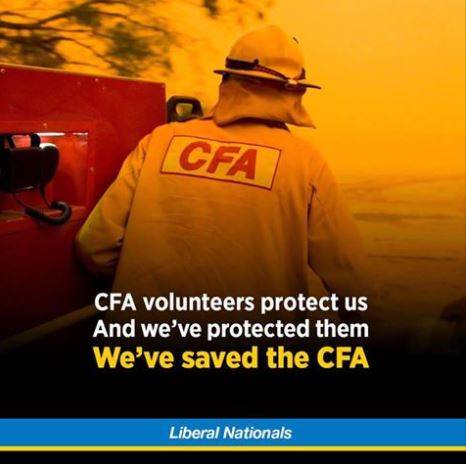 On 28 October 2015, the Liberal Nationals signed a pledge to commit to presumptive rights for all Victorian firefighters.

But despite this bipartisan support, Daniel Andrews cynically bundled presumptive rights with his legislation to break up the CFA.

Daniel Andrews did this knowing he did not have the numbers to pass his legislation and knowing this likely would delay access to compensation for firefighters with cancer.

It’s time for Daniel Andrews to stop playing politics with the health of firefighters and support a bipartisan approach.

Each and every day, our CFA volunteers leave their families to fight fires, saves lives and keep us safe.

The Liberal Nationals will protect those who protect us.

“Daniel Andrews tried to sneak through a bill to tear apart our CFA on Good Friday and it has been voted down in the Parliament,” he said.

“The Liberal Nationals will always fight for our hardworking volunteers whether they be CFA, SES, Life Savers or Coast Guard.

“If Daniel Andrews and Labor win the election in November, they will no doubt reinstate their plans to smash up the CFA. The Liberal Nationals will never do this.

“In November, the choice couldn’t be clearer.”