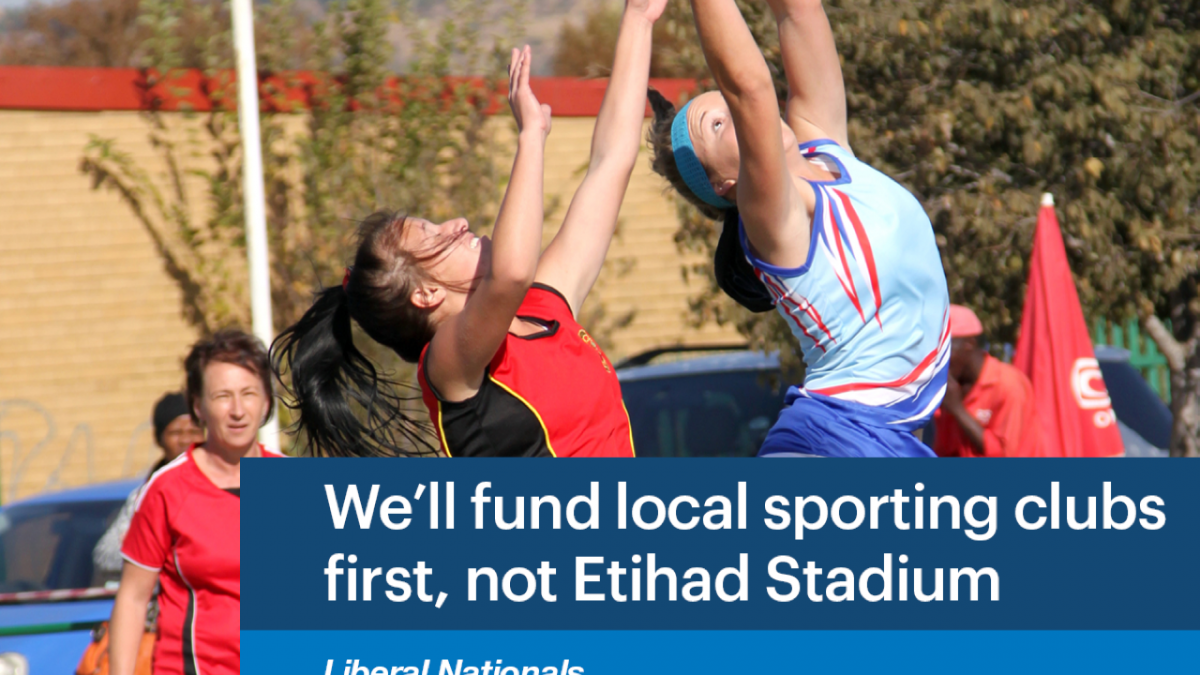 The Liberal Nationals believe the taxpayer money that Daniel Andrews has earmarked for the AFL to spend on Etihad Stadium is better spent on community sports clubs.

Daniel Andrews wants to give taxpayer money to the AFL to renovate Etihad Stadium and build a function room specifically to host the Brownlow Medal which happens just once a year.

Victorians love playing sport and watching sport.  But – for the sake of our kids – playing it must come first.

The AFL is a multi-billion dollar enterprise. It owns the biggest sporting code in Australia.  There is no justification to handover hundreds of millions of taxpayers’ dollars for a CBD asset when too many boys and girls can’t even get a kick on a local oval.

Labor has been in government in Victoria for 14 of the last 18 years and has allowed our suburban and regional sports facilities to fall into disrepair.

If Daniel Andrews believes that Victorians want their hard earned money handed to the AFL he should have the courage to put it to Victorians at the next election.

“I won’t hand over millions of dollars to the AFL to spend on Etihad Stadium, my goal will be to prioritise funding to our suburban and country sports clubs.

“If I’m elected in November, I’ll take every dollar Daniel Andrews commits to the AFL to spend on Etihad Stadium and give it to local sports ground upgrades including building new female change rooms.”

“The AFL bought Etihad Stadium as a property investment. Good luck to it. But Victorians don’t expect their taxes to prop up the AFL’s finances at the expense of the sporting needs of kids right across our state.

“Daniel Andrews has no mandate to enter into any lucrative deal with the AFL at the expense of Victoria’s community sporting clubs. If he believes that Victorians want their money handed to the AFL, he must have the courage to put it to November’s election.

“Let Victorians decide at the next election between Matthew Guy’s vision for community sport or Daniel Andrews’ plan to hand over buckets of cash to the AFL to renovate just one stadium.”

“There’s nothing fair about handing taxpayer money over to the AFL to upgrade Etihad Stadium when we don’t have adequate sports facilities here at the Bayswater Junior Football and Cricket Clubs.

“I challenge Daniel Andrews to visit local sports clubs all over Victoria and explain why he thinks the AFL deserves this money over grassroots sports.”