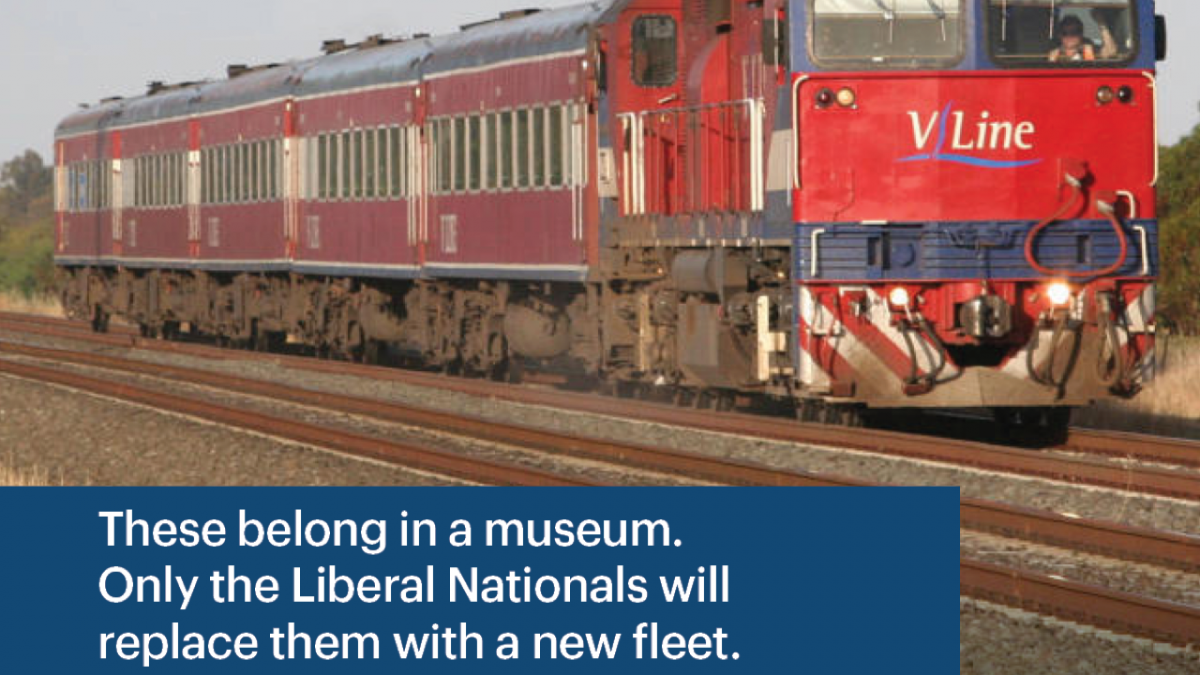 A Liberal Nationals Government will spend $633M to buy new trains for the North East and all other long- haul lines across the state. That’s 96 engines and carriages, 16 new train sets, capable of travelling at 160kmh, capable of carrying more passengers in greater comfort and with greater reliability.

Member for Benambra Bill Tilley says a Liberal Nationals government will give the North East the rail service it deserves with a $633 million investment to replace the ageing fleet of diesel hauled trains with new-generation, faster, long haul variants of the successful V/Locity trains.

The first step to revolutionise our regional rail service will be to replace V/Line’s ageing diesel, long-haul train fleet with new rail cars that will provide better comfort for passengers and most importantly, will be reliable.

“Under the Liberal Nationals plan, an order will be placed in June 2019 with the new fleet delivered during the first term of government,” Mr Tilley said.

“The fleet replacement of 16 new train sets, consisting of 96 new railcars, capable of speeds up to 160 km/h will be built in Victoria for our major regional lines – Albury, Warrnambool, Shepparton, Bairnsdale and Swan Hill lines.

“This will enable the existing 1980s-era trains to be gradually phased out of service.”

Mr Tilley said he was about delivering trains, not looking for an excuse to further delay the replacement of these N-Class relics.

“The failure of these 30-year-old trains is responsible for almost half the cancellations,” he said.

“The Labor Government’s latest excuse is the track, well we are getting on with it, and we’ll bring new trains to the North East and continue to lobby for a better line.

“We brought the trains back to the NE after the trackworks in 2011, something Labor couldn’t do, and now we are going to deliver new trains in 2022, much sooner than any of the current government’s glossy brochures with their work-shopped titles would suggest.”

Comments Attributable to Leader of the Opposition, Matthew Guy:

“I will bring Victoria’s regional rail into the twenty-first century.

“The Liberal Nationals have a strategy to decentralise Victoria’s population to ease the squeeze on Melbourne’s growth.

“A modern regional rail service is a central part of our plan.”