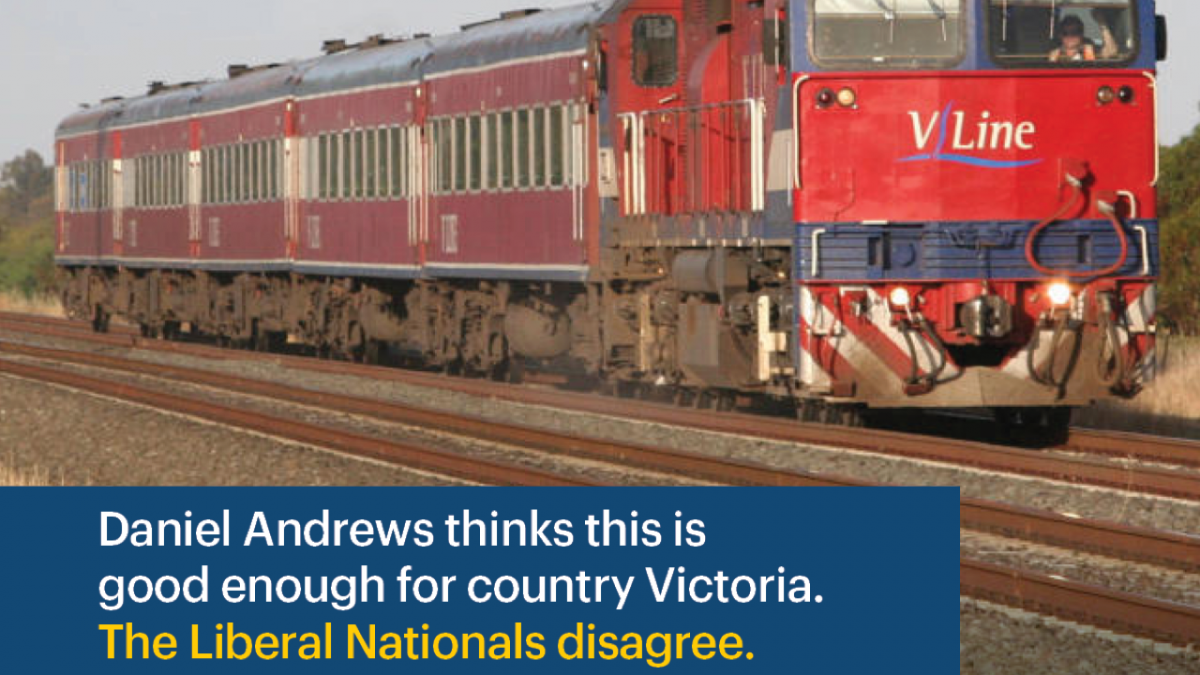 The Liberal Nationals will give country Victorians the rail service they deserve with a $633 million investment to replace the ageing fleet of diesel hauled trains with new-generation, faster, long haul variants of the successful V/Locity trains, says Opposition Leader Matthew Guy.

The first step to revolutionize our regional rail service will be to replace V/Line’s ageing diesel hauled train fleet with a $633 million investment of new rail cars that will provide better comfort and leg room, safety and amenity for passengers and most importantly, will be reliable.

Under the Liberal Nationals plan, an order will be placed in June 2019 with the new fleet delivered during the first term of government.

Supporting maintenance facilities which will provide more Victorian jobs will also be constructed.

Current plans include an upgrade to the Newport workshops or a new facility at Seymour.

The fleet replacement of 16 new train sets, consisting of 96 new railcars, capable of speeds up to 160 km/h will be built in Victoria as a new variant to suit longer haul country travel.  It is expected that there will be six cars per train which will be able to be configured flexibly where required.

This will enable the existing 1980s-era diesel hauled trains to be gradually phased out of service, with the new long haul fleet to service the Warrnambool, Shepparton, Albury, Bairnsdale and Swan Hill lines.

This investment is a major and long-awaited win for country communities, particularly along V/Line’s country rail network, who, for quite some time, have been calling for newer rolling stock to replace the ageing and unreliable N and Z set trains currently in operation.

“I will bring Victoria’s regional rail into the twenty-first century.

“The Liberal Nationals have a strategy to decentralise Victoria’s population to ease the squeeze on Melbourne’s growth.  A modern regional rail service is a central part of our plan.

“My government would focus on bringing new jobs to country Victoria, better regional roads and rail as well as improving health and education services.

Comments attributable to Leader of the Nationals, Peter Walsh:

“This is the first step in the Liberal Nationals plan to revolutionise regional rail.

“Slow and unreliable train services are holding the development of country communities back.

“We will turbo charge the development of country Victoria, starting with brand new trains.

“Labor has been in government for 14 of the last 18 years and has treated country Victoria like second class citizens.

“We will deliver a modern, safe, and comfortable fleet of new trains for our regional rail network.”

“A Liberal Nationals Government will give country Victorians the rail service they deserve.

“Country Victorians are being forced to use trains that were built when John Cain was Premier and Robert Di Pierdomenico was lacing on the football boots.  Daniel Andrews seems to think that’s acceptable, but the Liberal Nationals won’t accept that.”