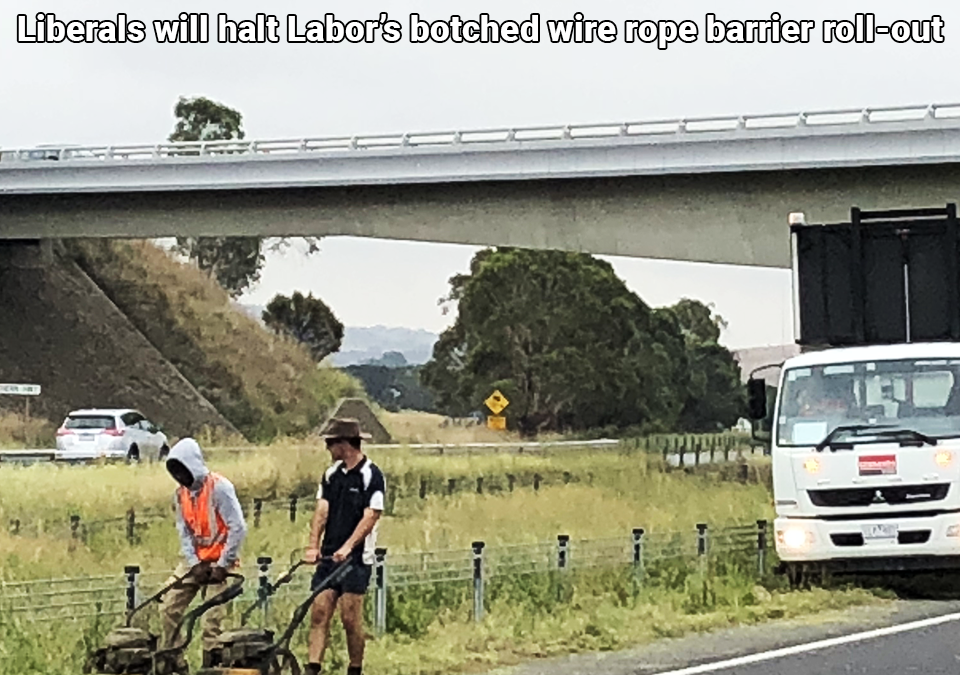 If done properly they can prevent some serious accidents and they can save lives.

We are concerned that the latest round of wire rope barriers are being installed in the wrong places and without proper planning and making some roads more dangerous instead of safer.

Some of the specific concerns about some of the latest installations include:

A Liberal Nationals Government will suspend Daniel Andrews’ botched rollout of Wire Rope Barriers and undertake a review of the process.

The review will include consultation with key stakeholders such as the CFA and RACV to determine a common sense approach to the placement and extent of future Wire Rope Barriers implementation.

Daniel Andrews’ Roads Minister says country motorists with concerns about the placement of wire rope barriers are ‘dingbats’ and that “people can go round playing banjos, playing conspiracy theories and rubbish like that – they need to deal with the facts and the figures.”

As this local example shows, the real dingbats are Daniel Andrews and his Roads Minister from Fitzroy.

“Daniel Andrews has slashed funding for Country Roads and Bridges and now he’s giving us Wire Rope Barriers installed in the wrong places.

“Daniel Andrews has ignored maintaining and repairing Victoria’s regional roads for the last three years and as a result they have become dangerous and are putting lives at risk.

“Labor has been in government for 14 of the last 18 years and has ignored regional roads which have become dangerous and are putting lives at risk.”

“Daniel Andrews governs for Melbourne’s inner-suburbs, a Liberal Nationals Government will govern for all Victorians.

“A picture tells a thousand words and these images clearly show that the government has botched the installation of these wire rope barriers and instead of saving lives it’s putting lives at risk.”

“The Premier for Melbourne has botched the installation of Wire Ropes Barriers and it’s putting lives of motorists and emergency services at risk.

“That’s why the Liberal Nationals policy is to suspend the current installation of the wire rope program and instead use that money to repair these roads so they are safer for all Victorians.”