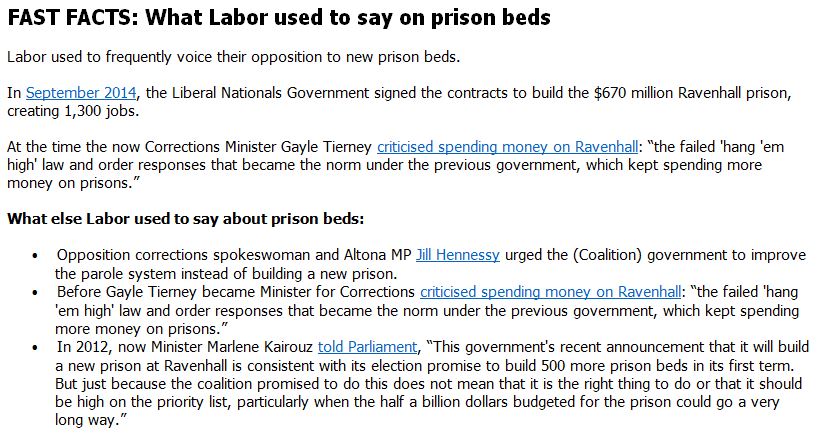 Today the Andrews Labor Government rushed out an announcement for an unfunded prison to be built one day in the future at a location they can’t say.

The Andrews Government is panicking when it comes to law and order policy.

This is a panicked and rushed announcement.

There’s no use building a new jail if you don’t pass the laws to put violent offenders in it.

Before Gayle Tierney became Minister for Corrections, she criticised spending money on the new Ravenhall Prison: “the failed ‘hang ’em high’ law and order responses that became the norm under the previous government, which kept spending more money on prisons.”

In 2012, now Minister Marlene Kairouz told Parliament, “This government’s recent announcement that it will build a new prison at Ravenhall is consistent with its election promise to build 500 more prison beds in its first term. But just because the Coalition promised to do this does not mean that it is the right thing to do or that it should be high on the priority list, particularly when the half a billion dollars budgeted for the prison could go a very long way”.

It’s no wonder Victorians don’t believe or trust the Andrews Government on law and order.